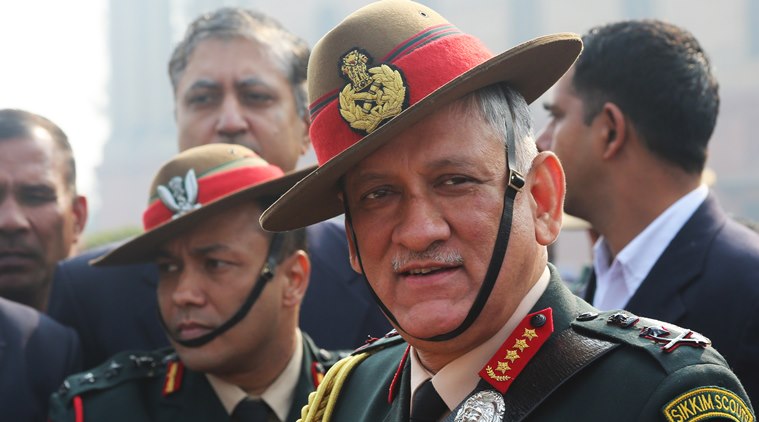 The Indian army will give Pakistan a reply “sooner rather than later” for the February 10 terror attack on a military camp in Jammu, General Bipin Rawat said. Six soldiers and a civilian were killed in the fidayeen attack in Sunjuwan by Jaish-e-Mohammed (JeM) terrorists. Soon after the incident, defence minister Nirmala Sitharaman had said that Pakistan, which she accused of backing the attackers, would pay for its “misadventure”.

“Pakistan thinks it is fighting a war that is paying them dividends but we have several options, including surgical strikes,” the army chief said in an interview on Wednesday, without giving details that would compromise India’s tactical and strategic response.

Rawat said that he would order a ceasefire at the Line of Control (LoC) as soon as Pakistan stops sending terrorists to India. “The Indian Army will honour the ceasefire and de-escalate tensions the day Pakistan stops sending terrorists across the line of control,” Rawat said, referring to the 2003 agreement put in place as a confidence-building measure.

Ceasefire violations at the LoC have spiked over the last year. There were 860 such violations recorded in 2017 from either side, as compared to 271 the previous year, according to government data. Asked about the January 27 firing in Shopian, in which three protestors were killed by army bullets at a time when the PDP-BJP government had withdrawn cases against first-time stone-pelters on the suggestion of the Centre’s interlocutor Dineshwar Sharma, Rawat said: “The cases were withdrawn as a goodwill gesture but what goodwill are they (the stone pelters) showing? The pelting continues.”

He defended the military action, saying stone-pelters were hampering military operations. “The army has a job to do. We don’t want collateral damage but what do you expect us to do when we get surrounded by a stone pelting mob? Even in Shopian, we fired in the air first.”

Referring to the controversial incident when Major Gogoi tied Kashmiri shawl weaver Farooq Ahmad Dar to the bonnet of a jeep last year, “Let me tell you, we honour local sentiments and don’t conduct operations during janazas (funeral processions) even though terrorists come there and fire in the air. What do you want me to do, have a seat in front of all jeeps. We got flak even for that.”

The Jammu & Kashmir police had registered an FIR against the army after the Shopian firing. Asked if he had given permission to the father of Major Aditya (named in the Shopian FIR) to approach the Supreme Court to get the police complaint quashed, Rawat said, “The father has a right to defend his son. If a girl (Kerala actress Priya Varrier) can approach the court because her wink has offended people can’t a father do the same if he apprehends that his son would be arrested?”

The General also had a piece of advice for the media: to not show visuals of grief-stricken family members of martyrs. “Because the media only focuses on soldiers killed by Pakistan, they build a narrative on how they have managed to inflict a blow on us.”

All martyrs are equal, he added, “even those killed in an avalanche”.