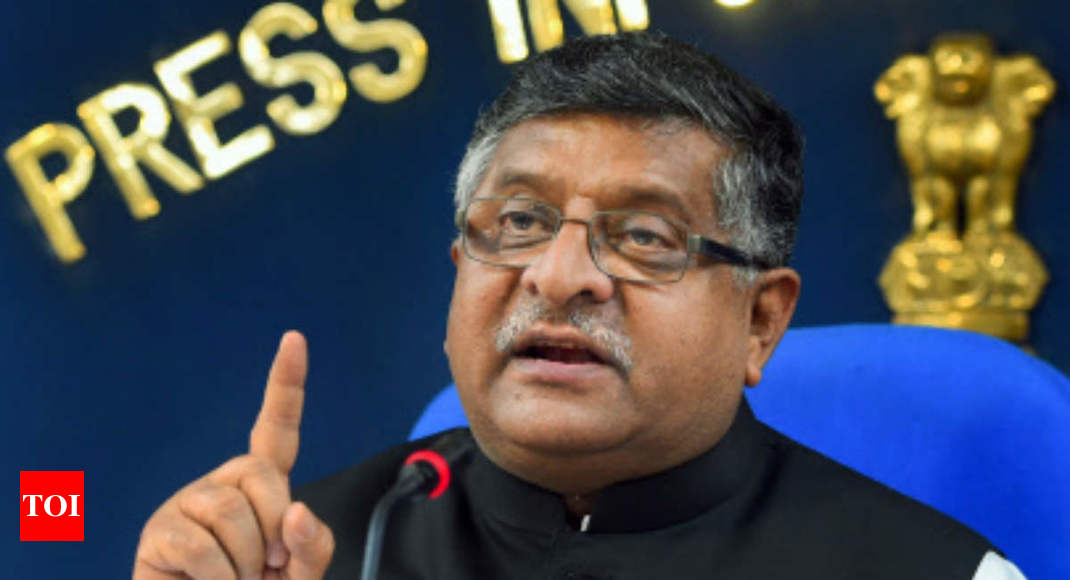 NEW DELHI: With Rajya Sabha members expressing concern over social media platforms being used to spread rumours and fake news, government today said it has asked them to provide technological solutions so that verified fake news and provocative messages can be filtered.

Government will strengthen the legal framework to ensure that significant social media and instant messaging service providers targeting Indian users, do not deprive them of the right to hold proceedings in India and protecting Indian laws, electronics and IT minister Ravi Shankar Prasad said.

Responding to the members’ concerns during a calling attention notice on the misuse of social media and propagation of fake news causing unrest and violence, he said the government was seriously considering appropriate rules requiring all social media platforms to locate their grievance officers in India.

“The duty of such grievance officer should cover not only to receive grievances on real time basis but also to inform law enforcement agencies,” Prasad said.

WhatsApp, he said, has informed that it will introduce fact-checking and fake news verification mechanisms to help people check the veracity of content on the platform.

Earlier, members including leader of opposition Ghulam Nabi Azad had raised serious concern over the incidents relating to abuse of social media leading to mob lynchings, with some of them even accusing the government of inaction.

In his response, Prasad said “these (incidents) are deeply painful and regrettable, as well as a matter of deep concern for the Government. The Government has taken prompt action”.

However, he said “a challenge has emerged (but) in its wake, we cannot abolish the existence of social media. India has emerged as a digital power. Even a common Indian is armed with the power of information and can raise questions.

“We should see both aspects. Social media is helping many students, small groups are exchanging information, farmers are using it. We need to introspect if you question the relevance of social media.”

He said the government planned to issue directives in public interest requiring all social media platforms to ensure that they “do not become vehicles for promoting hatred, terrorism, money laundering, mob violence and rumour mongering.”

These platforms should provide technological solutions so that verified fake news and provocative messages can be filtered by technical solutions.

They should also “bring in a more effective mechanism for receiving grievances and report to the law enforcement agencies. They should seek to provide the facility of verifying fake news on the platform itself,” he said.

Observing that the government does not regulate content appearing on social networking platforms, Prasad said these platforms, however, are required to follow due diligence in accordance with the Information Technology Act and the Rules.

“They (social networking platforms) have also to follow Article 19(2) of the Constitution and ensure that their platforms are not used to commit and provoke terrorism, extremism, violence and crime,” he said.

Referring to the reported breach at Facebook where the data of a large number of users were compromised by Cambridge Analytica, he said notices were immediately issued to the two companies and their response sought.

“Facebook responded that they will streamline their internal processes regarding handling of personal data. They stated that the case of Cambridge Analytica it was a case of breach of trust. They promised to take various other steps to ensure that such breaches do not recur,” Prasad said.

“The Government has entrusted this issue to be investigated by the CBI for possible violation of Information Technology Act, 2000 and IPC,” Prasad said, adding it is suspected that Cambridge Analytica may have been involved in illegally obtaining data of Indians which could be misused.

He said there were also reports that user data was “illegally accessed by hardware manufacturers who had tie-ups with Facebook. In regard to this issue, Facebook has reported that they are not aware of any misuse of information, including Indian users’ information.”

The Minister said the government was taking steps to increase awareness among the citizens to become adept in noticing fake news and avoid becoming a party to their viral circulation.

“A campaign to educate school children about the misuse of social media for propagation of false news will be taken up. The Common Service Centres will also be engaged in the task of promoting this message among people especially in rural areas,” Prasad said, adding that stakeholders such as educational institutions, professional and industrial associations, would be involved in the campaign.

“The state governments will also be requested to join in this effort to make the citizens more aware to prevent the use and abuse of social media. In this regard I will be writing to all chief ministers,” Prasad said.

During the debate on the issue, V Muraleedharan of the BJP said the “sinister designs of some people” have led to large-scale violence.

Leader of opposition Ghulam Nabi Azad said it was a matter of “shame” that such incidents happened in a civilised nation like India and tarnish its image within as well as abroad. He said 40 lynching incidents have taken place this year so far in 13 states across the country based on rumours.

Without taking names, Azad said Union Ministers and MLAs “go to jail to meet those allegedly involved in mob violence or felicitate such people. They should be dropped.”

CPI leader D Raja said social media was being used to create strains among human relations and conflicts have increased manifold. He claimed that right-wing organisations spread falsehoods to intimidate their opponents.

Derek O’ Brien (TMC) alleged that the BJP came to power in 2014 used social media to condition the minds of people.

Javed Ali Khan (Samajwadi Party) said the government has “washed off its hands” saying it does not regulate social media and said it is a cause of worry when political parties spread rumours in an organised manner.

V Vijayasai Reddy (YSRCP) said there has to be constant vigilance and monitoring to curb the spread of misinformation, adding that it was imperative for the government to engage with all the stakeholders on the issue.

KTS Tulsi term fuelling of violence through social media as “terrorism with a difference” done to strike terror while Narendra Jadhav (Nominated) said as many as 22 people have been lynched since May.

Later, the Minister said some people have objected even to cartoons, without taking any names.