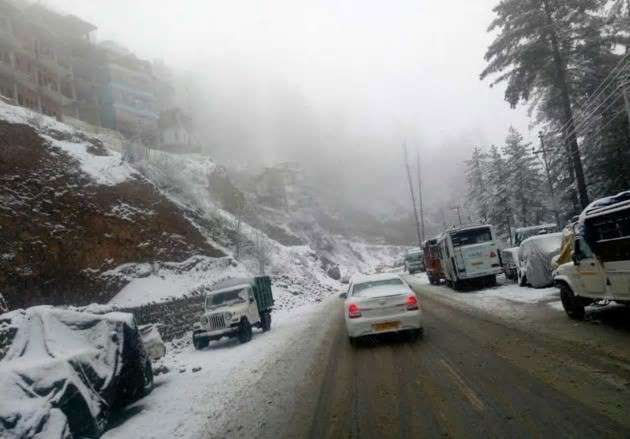 Many areas in Himachal Pradesh and Jammu and Kashmir witnessed fresh snowfall on Monday.

The snowfall in Kashmir snapped links with the rest of the country as the arterial Jammu-Srinagar National Highway was closed due to the accumulation of snow around Jawahar Tunnel in the Qazigund area.

“Due to slippery road conditions and fresh snowfall at the Jawahar tunnel and other areas, the highway has been closed,” a senior traffic department official told PTI.

The traffic authorities have stopped vehicular movement at the Nagrota check post in Jammu and Qazigun.

The snowfall also led to poor visibility at the Srinagar airport, disrupting the air traffic.

“Current visibility is 600 metres and the runway is not available up to 10.30 am due snowfall. The situation will be reviewed after that,” an official of the Airport Authority of India (AAI) here said.

This is the first major snowfall in Kashmir this winter, which was largely dry so far.

People throughout the Kashmir Valley greeted the snowfall that will replenish the perennial water reservoirs in the mountains. Authorities have set up helpline numbers for people to approach in case of emergencies in different districts of the valley.

Shimla and its nearby areas experienced intermittent spell of rain and snow since morning making it more picturesque.

“The areas are likely to witness more snowfall during next 12 hours,” said Manmohan Singh, director of the local metrological office.

Snowfall has brought cheers for the tourist as they rushed out of their hotels to witness the snowfall. “I had seen the weather forecast on the internet and made my way to Shimla hoping to witness a snowfall,” a visitor from Punjab’s Faridkot town said.