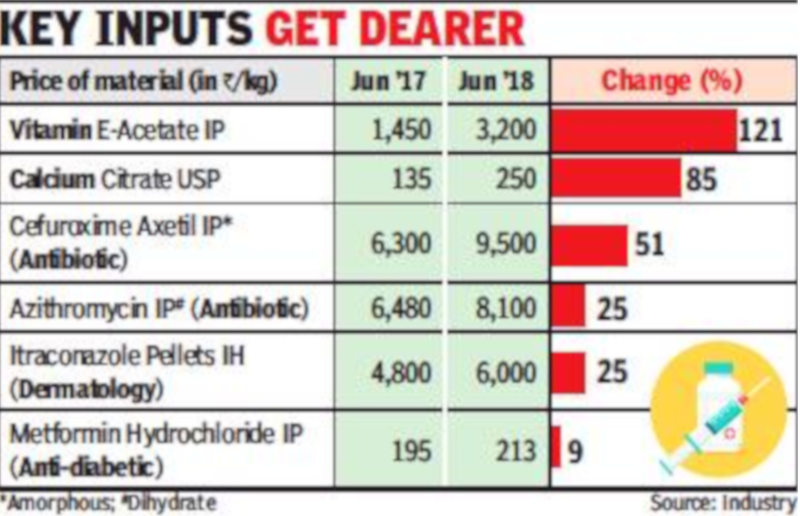 MUMBAI: The shakeup in Chinese factories in the wake of environmental concerns is sending shivers down the spine of the domestic drug industry, with many fearing there will be supply disruptions and inflationary pressures. The environmental disruption in China has led to a massive increase — as high as 120 per cent — in prices of key raw materials like active pharmaceutical ingredients (APIs).

Costs have increased across therapies — including anti-diabetic, cardiovascular, central nervous system, vitamins and antibiotics — over those prevailing in June 2017. Some of the largest hikes have happened in oncology where prices of key starting material for oncology APIs, like 5-Fluorocytosine and HMDS, have witnessed a jump of 60 per cent and 484 per cent, respectively. Certain others jumped around 20 per cent in 3 years.

Over the last year, nearly 1.5 lakh factories in China have closed down, of which a quarter will affect pharmaceuticals. An estimated 145 API manufacturers have shut shop there. It is feared that most small suppliers will not open again as they would not be able to comply with the tough environmental standards.

For the last several decades, the Indian pharmaceutical industry has been dependent on APIs as well as key intermediates for API manufacturing sourced from China. This was driven by the competitive pricing that Chinese suppliers could offer, based on large scales of manufacture as well as statedriven subsidies.

A Dr Reddy’s executive told TOI, “All these factors have led to a rise in input prices for most manufacturers of APIs. Furthermore, there is high pressure on formulation prices, especially in the US, which is the result of consolidation as well as pressure on healthcare costs. Therefore, API manufacturers are facing twofold challenges — higher input prices on intermediates, and lower prices on formulations.”

Since several basic chemicals could still be affected, the effects on supply chain are yet to be seen. Many starting materials could be impacted soon, then key raw materials, then APIs in weeks or months.

API manufacturer Uquifa’s executive director Saurabh Gurnurkar said, “Price increases of API are happening due to increase in KSM (key starting material) prices, which are the building blocks for the API (active ingredient). This is being driven by supply uncertainties emerging out of China, which is where KSM manufacturers are located. Even in India (another key base for KSMs), there have been instances of units being impacted by pollution concerns, leading to supply issues and thus the impact on product pricing, though clearly to a lesser extent than China.”

As KSM manufacturing starts to pick up outside China, increasingly products will be priced according to local economics, and this too impacts KSM costs and spills over to API pricing as well, he added.

Crude oil price trends have also impacted the solvents market, which is an important part of the cost composition when it comes to manufacture of APIs or intermediates. PwC India leader (pharmaceutical & life sciences) Sujay Shetty said, “If the rupee depreciation (against the dollar) persists, then there could be a long-term pain (for the industry).”

Reliance Life Sciences president and CEO K V Subramaniam said, “The pricing and availability situation of API intermediaries from China will compound the already stressed situation on margins, caused by customer consolidation and greater supply side competition in developed markets.”

In certain cases, prices increased sharply and then came down to higher than earlier levels. For instance, Vitamin C price increased from $3-4 to $13-14 per kg, and has since dropped to $6 per kg.