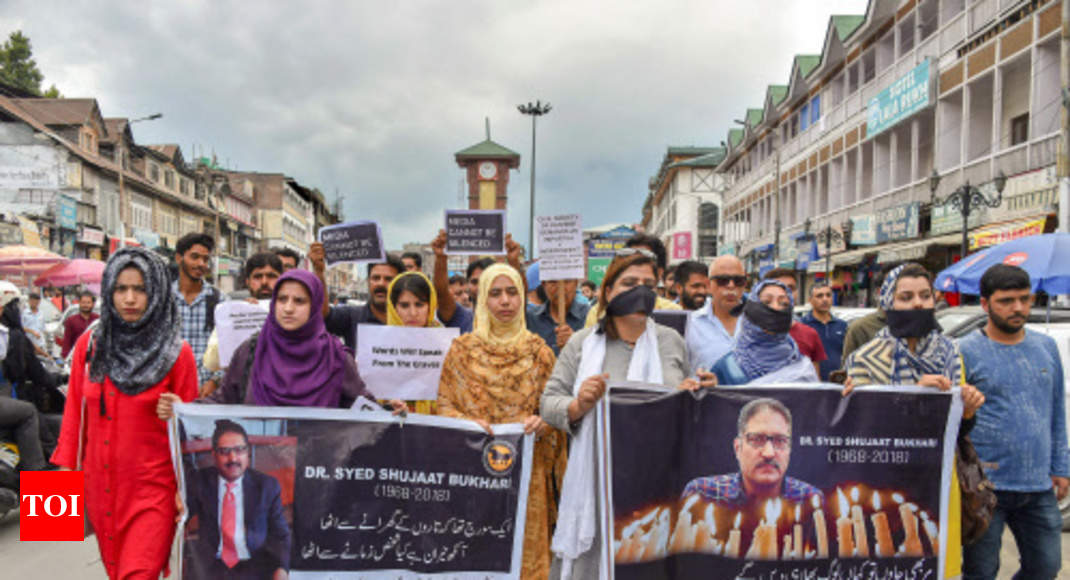 NEW DELHI: A citizens’ group comprising former finance minister and Modi critic Yashwant Sinha on Friday claimed that the people of Kashmir largely believed that the previous placatory language of need for a Kashmir dialogue would be dropped under Governor’s rule and anti-terror operations resumed in full swing.

Stating that its latest visit was overshadowed by political developments leading to imposition of Governor’s rule in the state and the fear instilled in civil society in the wake of assassination of journalist Shujaat Bukhari, the CCG said the Kashmiri people it spoke to tended to believe that PDP was taken by surprise by timing of the BJP’s withdrawal from the coalition. “Had she (Mehbooba Mufit) known what was coming, they felt, she herself would have withdrawn support to pre-empt the BJP and gained political mileage,” CCG said in a press statement issued on Friday.

With the governor’s rule in place, CCG claimed that the perception of opinion makers in Kashmir is that the Centre would now take a more belligerent position on the validity of Article 35A of the Constitution, being adjudicated by the Supreme Court and scheduled for hearing in August.

On the Ramzan truce, the group said it was announced without any preparation or roadmap and had no clear objective. It said that while most Kashmiris appreciated the fall in civilian killings and stone-pelting incidents during the ceasefire, its sudden unilateral announcement and abrupt revocation gave the Centre a chance to claim that it had given the militants an opportunity for moving towards peace but that they failed to grasp it. “This would then provide justification for continuing its hard military strategy,” it alleged.

Stating that Shujaat Bukhari’s brutal murder was signal to civil society groups and social activists that their efforts at peace would not be tolerated beyond a point, CCG said the civil society in the Valley seemed to be in retreat “as people feared silencing of non-partisan voices”.

It said the most disturbing aspect of the present situation was that the Kashmiri youths were under nobody’s control. “Such was the sense of disempowerment and helplessness among the youngsters that not even parental control seemed to work on those intent on joining the ranks of militants,” the citizens’ group warned.