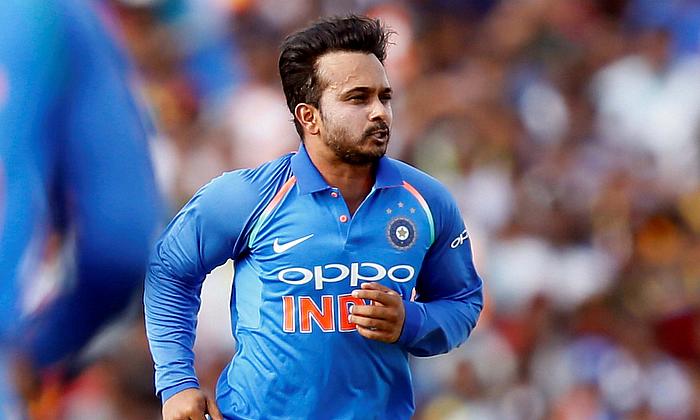 MSK Prasad, India’s chairman of selectors, has said Kedar Jadhav was not picked for the last three ODIs against West Indies because of his fitness history.

“We did not pick Kedar because of his history of fitness,” Prasad was quoted as saying “There have been occasions earlier when he has come back fit and then broke down, a case in point being the Asia Cup last month.”

Jadhav’s hamstrings – “compromised”, as his Chennai Super Kings coach Stephen Fleming described it during commentary – have caused him issues for a while. He injured himself in his first IPL match this season and missed the entire tournament, and then reinjured himself during the Asia Cup.

When the team was announced for the first two ODIs against West Indies, Prasad had said at the press conference that Jadhav was on course to come back after the first two matches. Fit again, Jadhav was playing a Deodhar Trophy match in Delhi on the day he was left out of the India squad. Jadhav batted, bowled and fielded in the Deodhar game, running twos without any apparent trouble; he was shocked when told moments after the match that he was not part of the India squad.

“I didn’t know [that I have not been selected],” Jadhav said in a press conference minutes after the match. “Obviously, I have to see [why].”

When asked if he was surprised, because his form was not a concern and he had proved his fitness at both the NCA and Kotla, Jadhav said: “Let’s see. I don’t know. You are the first one to tell me this [that I have not been picked]. I have to see why they have not picked me.”

Prasad clarified that they wanted Jadhav to play at least two games before they select him for India, given his fitness history, but Jadhav’s team was eliminated and he won’t get that chance. “Actually, we were thinking that if India A won today, then Kedar would have got another match, which would have given us a fair assessment of his match fitness,” Prasad said. “Maybe we could have added him as an additional player (in Indian team) before the fourth ODI as the Deodhar final is on Saturday. Players need to understand that there is a process that we follow while selecting the team.”

Jadhav said that he was fully fit. “The rehab was good, I cleared all the fitness tests, I was cleared match fit, which is why I was playing here,” Jadhav said. He ran hard in his 25-ball 41, pinching three consecutive twos in the last over of the innings. He bowled and fielded too, although he did leave the field for a few minutes before coming back on. However, it is unlikely there was any assessment made on the day because the team was announced at around 3.30pm IST. Three selectors were watching the match at the Feroz Shah Kotla, so it is unlikely the selection meeting took place today.

“They pick you only if you clear all the tests [at NCA] and you are completely fine,” Jadhav said.

Jadhav said there was no need for doubts despite his repeated injuries, as long as there was clearance from the NCA. “Only if you have followed all the rehab, all the fitness rules, all the exercises do they clear you at NCA. As long as they clear you, you shouldn’t be having any doubt when playing on the field. You should express yourself. When I get clearance from NCA, I don’t hold myself back to play or to dive or to bowl.

“Whatever injury it might be, when you are playing well, batting well, bowling well, it sets you back,” Jadhav said. “You don’t know how long you will be out for, and when you do come back whether you will rediscover the touch you were in. And you lose out on the matches in between. It hurts, but then you have to accept it and move on.”

The three remaining matches against West Indies are the last ODIs India play this year. Jadhav is now expected to turn out for Maharashtra against Vidarbha in the Ranji Trophy at the start of November.