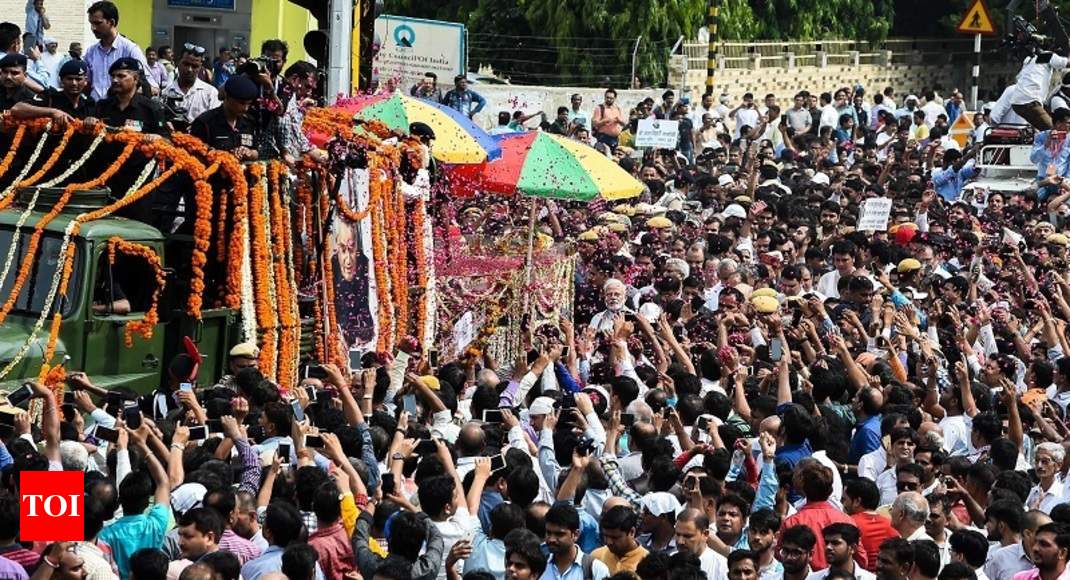 BJP chief Amit Shah, several union ministers and chief ministers of several states including Vijay Rupani, Shivraj Chouhan, Yogi Adityanath and Devendra Fadnavis were among those who walked sombrely behind the carriage as it slowly made its way to the Rashtriya Smirti Sthal where the last rites would be performed.

Vajpayee, 93, passed away at the All India Institute of Medical Sciences (AIIMS) here last evening after a prolonged illness.

Amid sultry weather conditions, thousands of people walked along the over seven km-long route with some showering petals at the carriage. Heavy security was deployed along the route of the procession.

The crowd was so massive that the people spilled over barricades and jostled to get a glimpse of the former prime minister.

During the procession, people chanted slogans like “Atal Bihari Amar Rahe” as Vajpayee’s cortege made its way from the BJP headquarters to the cremation ground.

Last night, Vajpayee’s body was taken to his official residence on Krishna Menon Marg from AIIMS where he was admitted on June.

Police have made elaborate security arrangements for the funeral procession, officials said.

Those travelling between east and west Delhi can use Vikas Marg, Shahdara Bridge and Wazirabad Bridge to reach Ring Road.