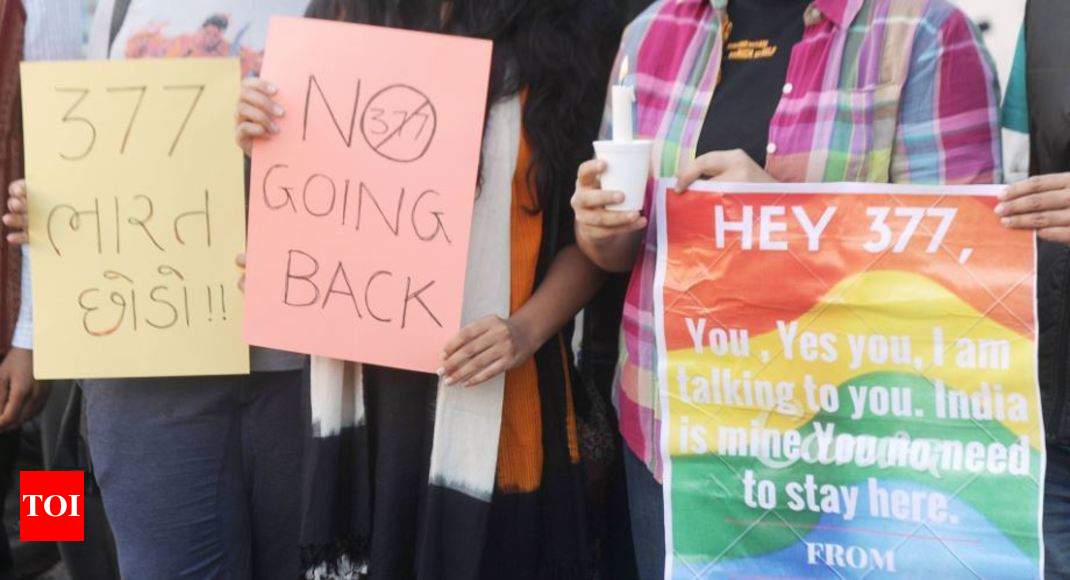 NEW DELHI: A rainbow of hope emerged afresh for the LGBTQ community as the Supreme Court on Friday set up a five-judge bench to hear from Tuesday a batch of new petitions seeking constitutional protection to the gay community’s sexual orientation through decriminalisation of Section 377 of IPC.

In the last two years many others, including Ashok Row Kavi and noted filmmaker Shyam Benegal, have joined the already pending petition of Naz Foundation to challenge provisions of the Indian Penal Code which was framed in 1860.

Naz Foundation was the first to file a petition in December, 2001 in the Delhi High Court, which had on July 2, 2009 decriminalised Section 377 by ruling that no adult would be prosecuted for indulging in consensual sex in private with another adult irrespective of gender.

One Suresh Kumar Koushal challenged the HC verdict in the SC, which on December 11, 2013 upheld the constitutional validity of Section 377 and set aside the HC concession to the LGBTQ community. The SC had on January 28, 2014 dismissed petitions seeking review of its decision. Naz Foundation’s curative petitions has been admitted and referred to a 5-judge SC bench.

All eyes will be on the SC as it hears the case with political parties shying from taking any public position in favour of altering — as opposed to heated debates on issues like triple talaq — in view of entrenched social norms and widely held conservative views that disapprove of same sex relations.

Tuesday’s hearing holds out hope to the LGBT community as the bench includes Justice Chandrachud, who as part of a 9-judge bench that held the fundamental nature of right to privacy had on January 8 said sexual orientation is part of this right. He accepted that the SC in December 2013 had erred in denying this right while adding that the issue will be decided by a five-judge bench in pending petitions.

“That ‘a minuscule fraction of the country’s population constitutes lesbians, gays, bisexuals or trans-genders’ (as observed in the two-judge bench judgment in 2013) is not a sustainable basis to deny the right to privacy…The guarantee of constitutional rights does not depend upon their exercise being favourably regarded by majoritarian opinion. The test of popular acceptance does not furnish a valid basis to disregard rights which are conferred with the sanctity of constitutional protection,” he had said.

Another judge on the same 9-judge bench, Justice Sanjay Kishan Kaul, had said: “I am in agreement with the view of Justice Chandrachud, who states that right of privacy cannot be denied, even if there is a minuscule fraction of the population which is affected. The majoritarian concept does not apply to Constitutional rights and the Courts are often called up on to take what may be categorized as a non-majoritarian view, in the check and balance of power envisaged under the Constitution of India. Ones sexual orientation is undoubtedly an attribute of privacy.”

With the backing of the views of these two judges, the LGBTQ community would find the going a lot easier than was the case when Justices G S Singhvi and S J Mukhopadhaya on December 11, 2013 had overturned the Delhi High Court ruling of 2009.

The present petitions are a new turn in the decade and half old legal fight on two counts. Well-known LGBT personalities, who have till now lived in fear of social opprobrium, have asserted their sexual preference. Also, for the first time persons directly aggrieved by Section 377 have challenged its constitutional validity, unlike Naz Foundation which is an NGO.