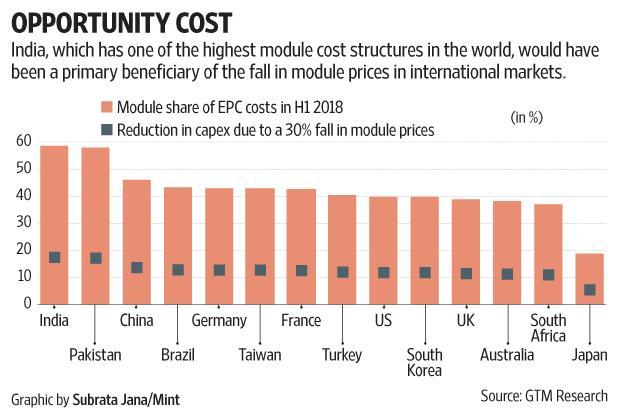 The safeguard duty on solar cells and modules, now temporarily withdrawn, is a cloud over the Indian solar energy sector. The duty relief is contingent on importers issuing a bond or a letter of undertaking, implying they will have to pay the import duty if the courts permit. But this is akin to a tax, as the developer will include the import duty in his tariff calculations if he has to bid for a project today.

The problem is states and central government entities are loath to accept higher tariffs. Indeed, some auctions stand cancelled citing higher tariffs, while others are facing delays in signing of the power purchase agreements.

Of course, the government is trying to assuage the industry’s concerns by advising a pass-through of taxation changes in tariffs. But that is easier said than done. Developers may well be wary given the thermal power sector’s bitter experience in pushing through the cost escalations at the state level.

The net impact of all this is a slowdown in capacity additions. If the current situation continues, the sector’s capacity addition estimates for the next two years will see downward revisions.

That will be unfortunate. The slowdown in capacity additions in China is expected to further drive down the prices of solar modules, a key component of a solar power plant. With large capacity-addition targets, India would have been a key beneficiary of this fall. As a percentage of EPC (engineering procurement and construction) costs, module costs in India are one of the highest in the world, according to GTM Research, a market analysis and advisory firm (see chart). But the safeguard duty will temper the benefit of the steep drop in global module prices in India, it warns.

The requirement, says Sampath of Oakridge Energy, is a holistic policy where tariff measures and domestic manufacturing policy go hand in hand. Many doubt if the proposed safeguard duty will achieve the targeted purpose.

One, it is applicable on manufacturing facilities in special economic zones also, where much of the local capacities are situated. Two, the two-year duration of the safeguard duty is seen to be too short a time for the local manufacturing sector to gain a foothold.

“Safeguard duty does not encourage local manufacturing; it protects it. Protecting against predatory pricing makes sense if the domestic industry is otherwise a contender, eg. steel or textile industry in India. Indian solar manufacturing has been plagued by lack of scale, outdated machinery and lack of depth in terms of backward integration,” says Sanjeev Aggarwal, managing director and CEO of Amplus Energy Solutions.

The Top Runner programme in China encourages installation of solar modules that are higher in efficiency and power output.