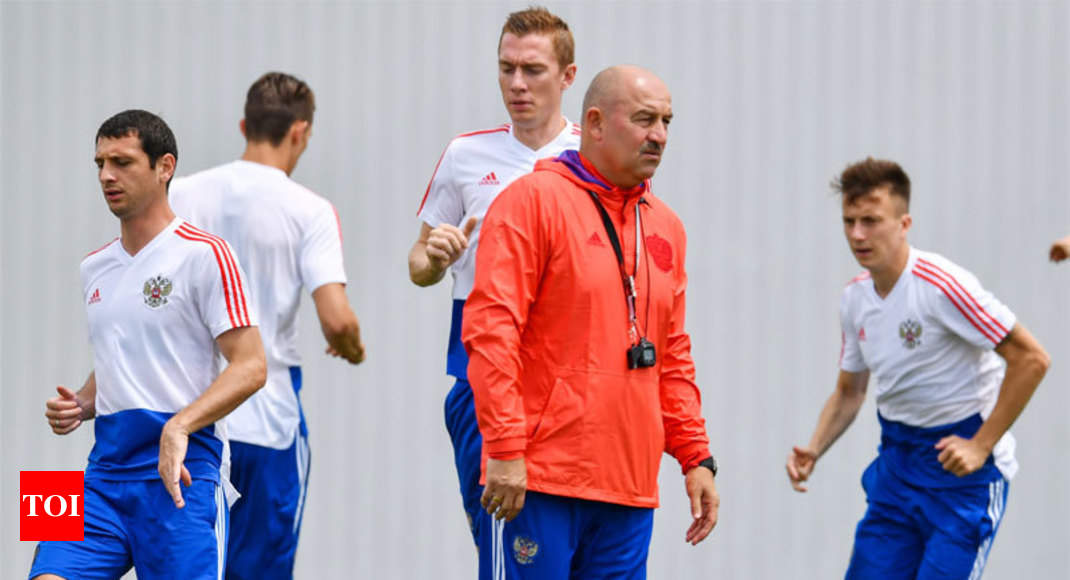 SOCHI: For Stanislav Cherchesov, this World Cup has been a relationship-building exercise. The Russian journalists say he used to be a very arrogant character, a complete opposite of his predecessor Leonid Slutsky.

After guiding the Russian team to the quarterfinals, much to the disbelief of the whole nation, Cherchesov’s wry sense of humour is finally getting some appreciation.

A few claps were heard when Cherchesov walked into the press conference room in Sochi on Friday; it was in stark contrast to the first one he addressed in Moscow.

When asked whether Russia were going to play the most important match on Saturday, Cherchesov was at his pithy best: “I hope the most important games are ahead of us.” He then waited a few moments to judge the reaction of his audience.

Enjoying their bemused look, he said, “Aren’t you happy with the short answer? Brevity is the sister of genius said Anton Chekhov, you know.”

Not many football coaches in the world quote Chekhov while discussing the game and one could understand why Cherchesov was disliked by journalists. A sharp, educated mind is not easily appreciated. Neither are answers that are indirect and reveal little.

Cherchesov answered all the questions but gave away very little about the situation in his team. “I will not open all my secrets. But I can say that Croatia play at a very high level. We will have a team meeting tonight after dinner where we will have a theory class.”

When told about the euphoria that has gripped the nation after the win over Spain, the coach said, “You journalists may be euphoric but we are not. I am trying not to watch the social media or read newspapers. I have asked my players to do so as well. They are out of touch with reality. They all talked about tournament favourites and most of them have gone home.”

Cherchesov’s relationship with Artem Dzyuba has been less than cordial in the past but the striker has been one of the keys to Russia’s success in their amazing journey to the semifinals. “If I did not know that Dzyuba can perform at this level, I would not have invited him to join the national team.”

When asked whether it was some kind of a dream that the Russians were dreaming, Cherchesov said, “At my age I can’t be a day dreamer. We have a plan and we work to realise that plan. And trying not to get distracted is part of the plan. I appreciate criticism if it’s a constructive one. What my players and I dislike is to be humiliated. Criticism should not be to humiliate.”

The only team information that came through was about Alan Dzagoev. “It is sad that we lost a player like him in the first match itself. But he has recovered and joined training. I still haven’t decided whether to start with him. But he is an option.”

It is common knowledge that the Russian president Vladimir Putin is taking keen interest in the World Cup and the team’s fortunes. He is hosting dinners which have been attended by former greats. A newspaper reported that Putin asked them to predict the winner of the tournament since they are “experts”.

The president had called the coach during the post-match press conference after Russia’s 5-0 win over Saudi Arabia in the inaugural match. Cherchesov said, “The president called me before the Spain game as well. It is a boost for us. It is good that the head of state is behind us.”

Along with the president, the disbelieving people of Russia have also put their trust in Cherchesov – to deliver the seemingly undeliverable.