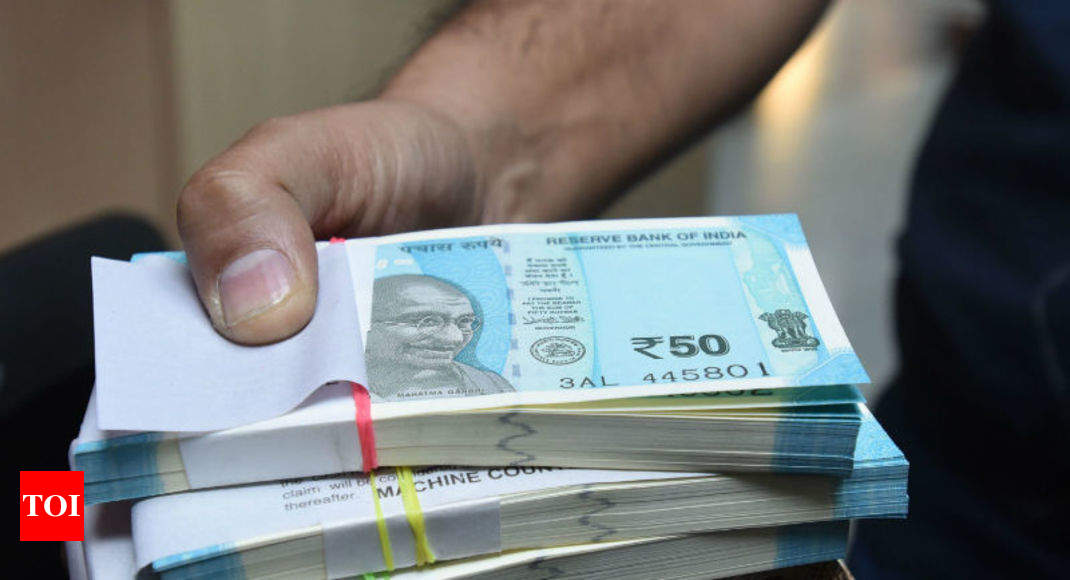 MUMBAI: The battered rupee on Monday suffered yet another blow by plunging 34 paise to end at a near five-year low of 68.80 against the buoyant US dollar in the midst of weak global trends and concerns on macro-economic front.

With very little chance of RBI intervention, panic dollar demand from importers and speculative traders sent the home currency sinking to a low of 68.81 in late afternoon deals.

Although the initial gains had been short-lived. It touched a high of 68.33 in morning deals.

The rupee tumbled below 69-mark for the first time ever on Thursday and hit a life-time low of 69.10.

Trade worries were at the heart of currency market weakness.

“The Rupee has been one of the worst performing currencies among peers… Against the US dollar, it has depreciated by 6.6 per cent in calendar year 2018 and 8 per cent year to date. Adding to our concern is the increasingly hawkish Federal Reserve, which has now initiated a reversal of the Quantitative Easing (QE) – marking an end to global easy money,” Karan Mehrishi, Lead Economist at Acuite ratings and research, said.

“With volatile commodity prices playing havoc with the import bill, we reckon that the situation will worsen at the trade front as well. We are expecting the Current Account Deficit to peg at 2.2 per cent of GDP (30 bps higher than previous year). Our estimate for the rupee relative performance to the US dollar suggests an upper bound of 70 by Q3 FY19. An improvement can be foreseen in calendar year 2019,” he added.

Though, crude prices were down little on prospects of increased Saudi supply after US President Donald Trump called on OPEC to produce more oil.

Brent crude futures, an international benchmark, is trading sharply down at $78.56 a barrel, in early Asian trade.

It had gained more than 5 per cent last week.

Dollar strengthened broadly in Asian session despite an escalating trade tensions between US and China as market is pricing on Fed rate path is largely unchanged.

The Federal Reserve is on course for having two more hikes this year.

The US is set to impose fresh tariffs on $34 billion worth of Chinese goods on Friday and the world’s second-largest economy is on course to retaliate.

Meanwhile, overseas investors and funds pulled out nearly Rs 48,000 crore from Indian capital markets in the first six months of 2018, making it the steepest outflow in a decade due to deteriorating domestic macro environment.

Foreign direct investment (FDI) in India seems to be petering out with the inflows growth rate recording a five-year low of 3 per cent to $44.85 billion in 2017-18, the latest data of the Department of Industrial Policy and Promotion (DIPP) showed.

In the meantime, country’s foreign exchange reserves fell for a second week to $407.82 billion, the RBI said.

Domestic equities fell back after a weekend rally with cyclical sectors including mining, power and infrastructure stocks succumbing to profit-taking.

At the interbank foreign exchange (forex) market, the Indian unit resumed a tad lower at 68.48 against weekend’s close of 68.46 on mild dollar selling by banks and exporters.

But quickly bounced back to hit a session high of 68.33 briefly, but the recovery fell short of changing the negative tone.

Tracking the unfavourable situation surrounding the overall forex sentiment, the local unit plunged to an intra-day low 68.81 towards the fag-end trade before closing at 68.80, revealing a steep loss of 34 paise, or 0.50 per cent.

The bond market also lost ground and the 10-year benchmark bond yield edged up to 7.91 per cent.

The dollar index, which measures the greenback’s value against basket of six major currencies, was down at 94.74.

In the cross currency trade, the rupee fell back against the pound sterling to finish at 90.47 per pound from 89.98 and retreated against the Japanese yen to settle at 62.11 per 100 yens from 61.90 yesterday.

The local currency, dropped further against the euro to close at 80.04 as compared to 79.78.

Elsewhere, the common currency euro is trading lower against the greenback largely impacted by renewed political crisis in Germany.

The British Pound also remained under pressure against the back drop of growing Brexit uncertainties, though better than expected UK manufacturing PMI print limted the slide.

In forward market today, The benchmark six-month forward premium payable in November and and the far-forward May 2019 contract settled at 122-124 paise and 271-273 paise, respectively.