MUMBAI: For the first time, the rupee closed below the 70 mark against the US dollar as sentiment turned negative due to wider trade deficit. The local currency opened weak, breaching the 70 level, and it touched a low of 70.40 before closing at 70.16 — down 27 paise from its August 14 close. Although the rupee had breached 70 on Tuesday, it had firmed up during the day to close at 69.89. Data released by the government on August 14 showed that the fiscal deficit had hit a five-year high of $18 billion.

But the government seems to be sending a message that 70 is the new normal and markets have to get used to a weaker rupee. “Let’s be clear, the depreciation of the Indian rupee against the US dollar is not indicative of a bad time for the Indian economy. Over the past three years, the rupee has been overvalued by approximately 17 per cent and the current depreciation of 9.8 per cent since January is a move towards its natural value,” said NITI Aayog vice-chairman Rajiv Kumar in a tweet. 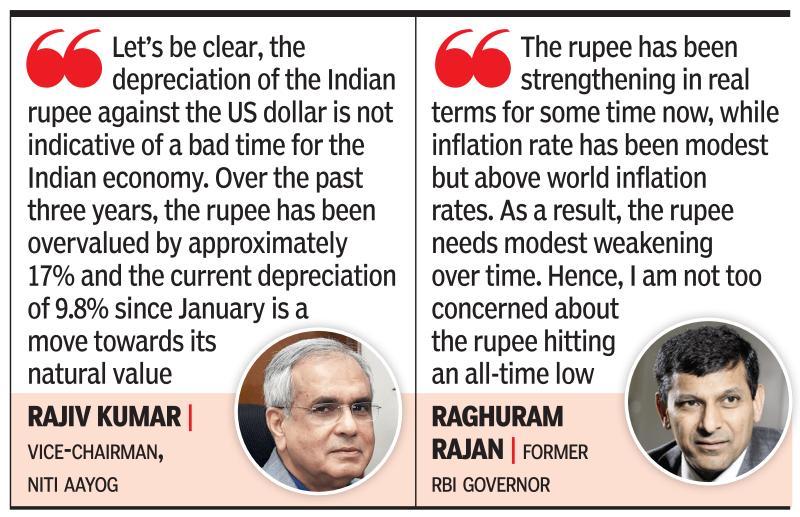 In an interview, former RBI governor Raghuram Rajan said that he was not too concerned about the domestic currency as it was more a factor of dollar strength rather than necessarily rupee weakness.“The rupee has been strengthening in real terms for some time now, while inflation rate has been modest but above world inflation rates. As a result, the rupee needs modest weakening over time. Hence, I am not too concerned about the rupee hitting an all-time low,” Rajan said.

The foreign exchange markets will remain closed on Friday on account of Parsi New Year. Dealers said that the new resistance level for the rupee is 72 and they expect the local currency to remain within that range unless there is some pressure from global markets.

According to economists, a bit of depreciation has been built in over the months due to the inflation differential between India and the US. July was the ninth straight month in which inflation was higher than the RBI’s medium-term target of 4 per cent. The volatility in the foreign exchange market has also led to bond prices falling.

HSBC chief economist Pranjul Bhandari said, “With oil averaging $75 a barrel in FY19, the current account deficit is likely to widen further to 2.4 per cent of GDP from 1.9 per cent in FY18. FDI inflows and NRI deposits may not be able to rise dramatically in a matter of a year. In fact, just in the first quarter of the year, we estimate that the balance of payment reached a deficit of $10-15 billion.”