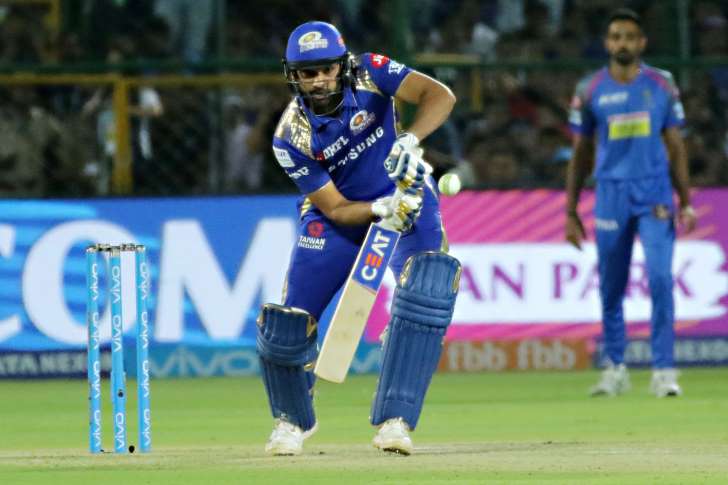 Rohit Sharma on Friday, became the first Indian to hit 300 maximums in T20 cricket across all tournaments.

Rohit hit a six off Mujeeb Ur Rahman in the 17th over to reach the landmark as Mumbai Indians beat Kings XI Punjab by six wickets at the Holkar Stadium in Indore to keep their playoff hopes alive.

The Mumbaikar has hit 78 sixes in international cricket and 183 in the Indian Premier League so far. The remaining 40 have come in other T20 tournaments like Champions League T20, Syed Mushtaq Ali Trophy and others. In total, he has 301 sixes to his name.

Gayle also leads the charts in IPL cricket, hitting 290 maximums. Rohit is second in the list with 183 to his name. Mahendra Singh Dhoni and Suresh Raina have smashed 180 sixes each while AB de Villiers comes fifth with 179 maximums.

Rohit has been in decent form this season, although his side has struggled to hit the ground running in IPL 2018. The Mumbaikar has slammed 220 runs from 9 matches so far, with his highest being 94 against RCB at the Wankhede Stadium earlier in the season. He has hit two fifties at an average of 31.42.

Rohit has slammed 4427 runs from 168 matches with one century so far in the IPL. His highest is 109 not out against Kolkata Knight Riders at the Eden Gardens.

Mumbai however, have not been able to go off to a flyer they would have liked. After nine games, they have lost six and won three and are fifth on the points table.

They have to win all their remaining five games to reach the playoffs. Not only that, teams above like KKR and around them like Rajasthan Royals, Royal Challengers Bangalore and Delhi Daredevils will also have to lose their matches for MI to reach the top four.