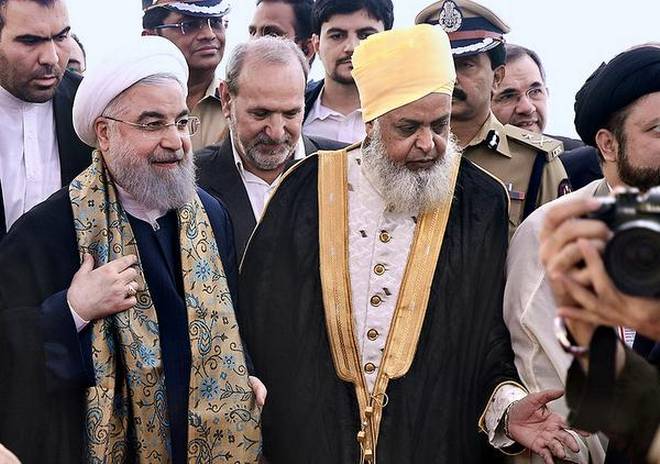 President of the Islamic Republic of Iran Hassan Rouhani on Friday said that his country is ready to share its rich natural resources with India. He also gave a call for Muslim unity and universal brotherhood while delivering a speech at the packed Mecca Masjid where he offered Friday prayers.

“Iran announces from here that it will fully cooperate with India to share oil, gas and energy for the development and progress of India and its people,” Mr. Rouhani said. Iran will permit India to use the Chabahar Port as a transit point so that its goods can enter other countries in Central Asia, besides Afghanistan.

Mr. Rouhani said India and Iran can work together in agriculture, industry and new technology sectors to enhance cooperation in areas of mutual interest. He also said that Iran wants peace in the region.

Mr. Rouhani emphasised that the “new century” is Asia’s and that Iran and India will “shine bright”.

Making a strong case for Muslim unity, Dr Rouhani said that had the community remained united, Jerusalem would not have been declared as Israel’s capital. He also criticised the restrictions imposed on persons from certain Muslim countries from entering western countries. He said Muslims believe in peace and mercy.

Commenting on the shootings in educational institutions in the U.S., Dr. Rouhani said that students in schools and universities in western countries fall prey to mass killings, implying that it is due to gun culture.Sectarian differences

Mr. Rouhani said “enemies of Islam” want to divide Muslims. The Mecca Masjid, he said, bears testimony that Indian and Iranian Muslims are brothers. “All schools of thought are like rivers. They all flow into a sea,” he said urging the Muslim community to rise above sectarian differences.

Later in the evening, he spoke to Iranians living in India. Dr. Rouhani was given a rousing welcome at the meeting.

Taken around by State officials, including N.R. Visalatchy of Heritage Telangana, Mr. Rouhani was briefed about the historical background of the tombs as well as the ongoing conservation and landscape work on the location. “He was very keen and asked a lot of questions while looking around at the small display of photographs we set up for him,” said Ms. Visalatchy.

The first Qutb Shahi king, who ruled from Golconda, hailed from Hamadan in present day Iran. The dynasty which ruled till 1687 had continued contacts with the Persian empire.

Mr. Rouhani offered prayers at the mausoleum of Sultan Muhammad Quli Qutb Shah. He reportedly seemed curious about the tile patterns still existing on Ibrahim Qutb Shah and Muhammad Qutb Shah’s tombs. “We explained about the six-colour tile pattern and the conservation work that is being carried out on the site,” said Yoshowant Purohit of Aga Khan Trust for Culture, which is carrying out the work.