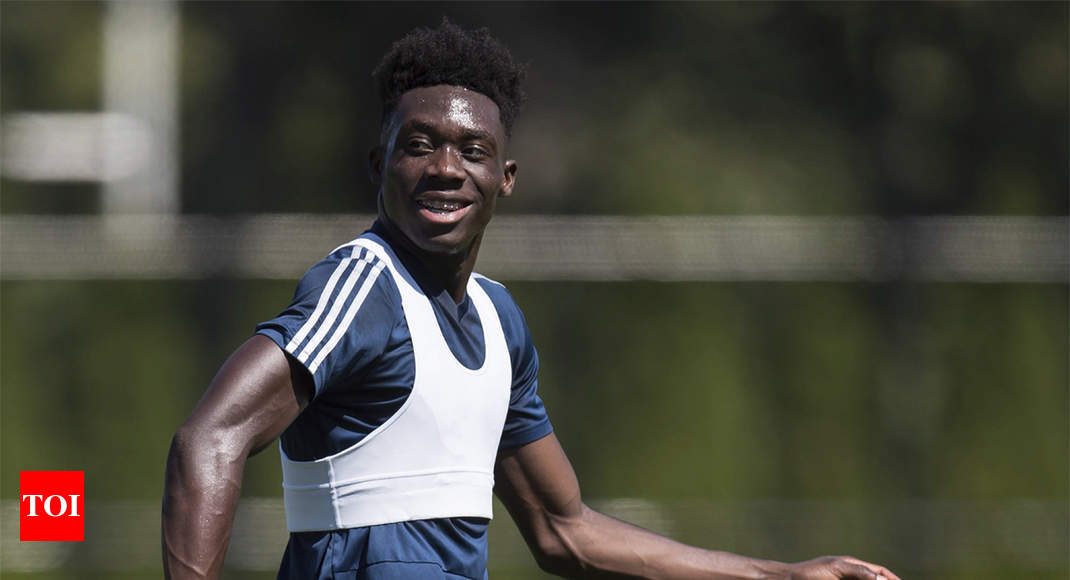 Ghana-born Davies has signed a deal until 2023 from Vancouver Whitecaps in the North American MLS league as Bayern saw off the likes of Liverpool, Paris Saint Germain and Real Madrid.

“He has signed,” Bayern director of sport Hasan Salihamidzic sounded relieved when the contract was finally inked on Wednesday.

However, Bayern fans must until 2019 at the earliest to see Davies play in the famous red shirt.

The fleet-footed 17-year-old will only join Bayern’s senior squad in January after turning 18 in November and seeing out the season with Vancouver.

“He has great potential with his speed and technique,” Schweinsteiger, the ex-Germany captain and Bayern legend who now plays for Chicago Fire in the MLS, told German daily Bild.

“If he works hard, especially on his defence, he can, of course, make it in Europe.”

According to reports, Bayern have paid around 14 million euros ($16.4m), which could grow to 18.8m euros if Davies fulfils his potential.

He is regarded as the one of the brightest talents in the North American league.

His first call up to the senior Canadian squad came on June 6, 2017 — the same day he officially became a citizen of Canada after taking an oath.

Davies made his Canadian debut the following month, aged just 16, at the Gold Cup when he scored twice in a 4-2 trouncing of French Guiana.

He ended up scoring three goals in four games, winning the Young Player of the Tournament award as the Canadians went out to Jamaica in the quarter-finals.

In his 20 games for Vancouver, Davies has scored three goals and set up six more in the MLS.

“He is a young, talented player that many clubs in Europe wanted,” said Bayern’s new head coach Niko Kovac.

“He is a player who will definitely have a great future, if he stays healthy and develops in the way both he and we expect him to.”

His transfer is the latest step on a remarkable rise for the teenage Canadian international.

“As a kid, you dream about this moment and I’m happy it came through,” Davies said of his transfer to Bayern, who will chase a record-extending seventh Bundesliga title in 2018/19.

“Now it’s time to continue working, I have to give everything to make the most of this opportunity.”

Bayern have laid out their vision for the rising star.

“They opened my eyes and explained everything very well,” says Davies.

He follows in the footsteps of Calgary-born Owen Hargreaves, who helped Bayern win the 2001 Champions League title before joining Manchester United.

Davies has trod a colourful path to Munich.

He was born in a refugee camp in Ghana in 2000 after his parents fled fighting in the second Liberian civil war and when he was five, the family moved to Canada as refugees.

His talent was quickly spotted and he joined the Whitecaps youth set-up in 2015 at the age of 14, making his MLS debut the following year before Canada came calling in 2017.

However, joining Bayern as a rising star is no guarantee of making the grade in Munich.

Pierre-Emile Hojbjerg, now 22, was just 16 when Bayern snapped him up in 2012 from Brondby.

He made his Bundesliga debut the following year, but despite rave reviews from Bayern’s then-coach Pep Guardiola, Hojbjerg failed to hold down a first-team spot.

He was sold to current club Southampton in 2016, after loan spells as Augsburg and Schalke, and failed to make the final Denmark squad for this year’s World Cup in Russia.

With their international stars now back in Munich after World Cup duty, there is plenty of teenage talent in the Bayern squad on the pre-season tour of the USA.

Junior Luxembourg international Ryan Johansson, 17, and American defender Chris Richards, 18, recently signed from Dallas FC, both played in a 2-0 defeat to Juventus on Wednesday in Philadelphia.