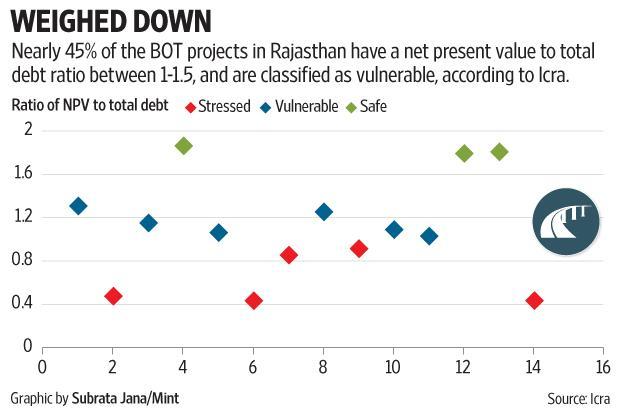 Nearly 45% of the BOT projects in Rajasthan have a net present value to total debt ratio between 1 and 1.5, and are classified as vulnerable, according to Icra.

Infrastructure projects have been the focus of government expenditure. Contract awards in the roads sector scaled a nine-year high in fiscal year 2018 even as there has been respectable ordering of projects in other infrastructure segments such as railways and water.

However, the government’s tinkering with the project terms and conditions after the contract is awarded is undesirable. It throws the developers’ cash flows out of gear, putting execution of the project at risk too.

Take the case of toll exemption granted by three state governments—Maharashtra, Gujarat and Rajasthan, for certain vehicle categories. Given that passenger vehicles comprise nearly half the traffic on state highways, it would immediately lower revenue collections. Further, vehicles that had chosen alternate routes to avoid tolls would perhaps get back on to toll roads. This would increase wear and tear leading to higher maintenance and repair costs.

The drop in revenue along with increase in costs would translate into lower cash flows compared to what was estimated at the time of bidding for the project.

Toll exemption is not the only whimsical decision. The ambitious Bharatmala Pariyojana road network that plans to carve out the shortest route to a destination could jeopardize revenue and profits of some existing projects. Estimates indicate that 25 National Highway toll projects with ₹19,435 crore of debt would be at risk on account of traffic diversion to the new routes.

So, what is the developer’s risk? Given that the infrastructure projects have a long gestation and involve hefty borrowings, any deviation from the estimated cash flows would hamper the developer’s ability to pay interest costs on the borrowing. As it is, traffic flow on some of the road projects is lower than forecast, which implies a revenue shortfall to begin with.

Such instances of change in government policy have been witnessed even in airport development projects, where change in user development fees collected from tourists has impacted estimated revenue and profits. Also, not very long ago, power projects became victims of the government’s inability to provide fuel linkages that pushed them into a quagmire of debt.

Such uncertainties hang like a Damocles’ sword on infrastructure companies. Hence, retail investor faith, although improving after most companies cleaned up their books in the last two years, is low in the sector.