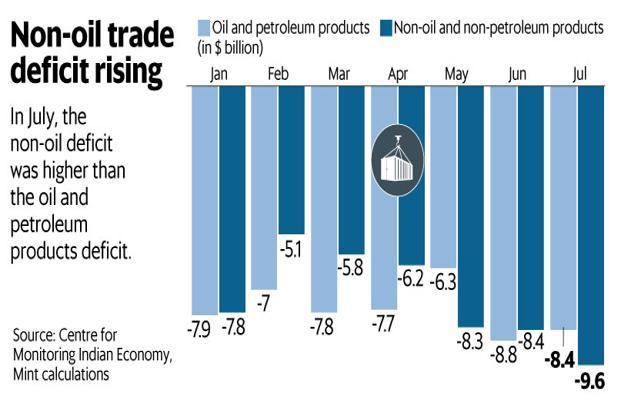 What’s more, of the total trade deficit of $18 billion in July 2018, the deficit on account of oil and petroleum products was smaller than the deficit for other items. Clearly, it isn’t just oil prices that are a problem.

But is the rise in the trade deficit, from $15.7 billion in January 2018 to $18 billion in July, because of falling exports or rising imports? Well, exports have gone up a bit, a small part due to petroleum exports, but largely due to higher exports of other goods.

The problem is that the increase in imports has been much higher and, as we have seen, it’s not just oil imports. Both gold imports and non-oil, non-gold imports have increased.

A look at the growth in non-oil imports between January and June throws up some surprises. For starters, a large rise in imports has been in “chemicals and related items”, with fertilizer imports forming a big chunk. As widely noticed, imports of electronic goods too have gone up, but between January and June, the increase has not been because of mobile phones, but in computer hardware and electronic components. Gold imports too increased substantially. In July, iron and steel imports went up sharply.

The rise in non-oil imports, with a concomitant rise in the current account deficit, has worried the government, which prompted it to raise tariffs on several items. In the medium term, of course, there is no alternative to improving the competitiveness of our industries.