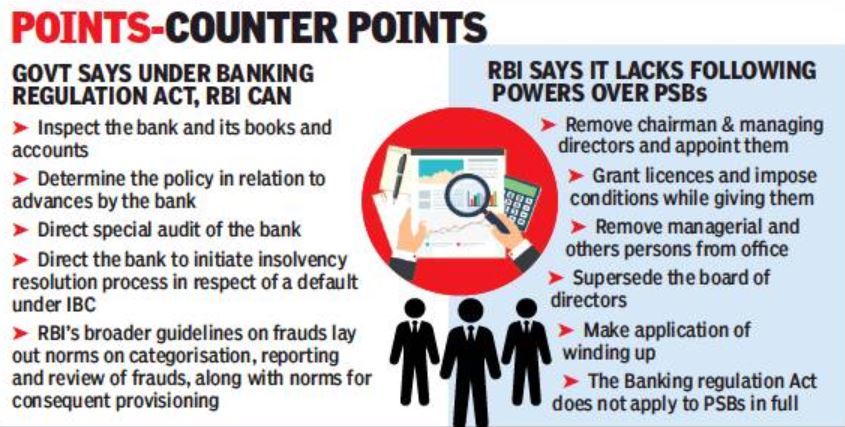 NEW DELHI: The government has made it clear that the RBI has enough powers to deal with any situation arising in any bank, including state-run lenders, indicating that the demand for more powers to effectively deal with PSU banks may not be justified.

In a written reply to Parliament, the finance ministry has listed the powers that the central bank enjoys under the Banking Regulation Act, 1949. It has also listed the powers that the RBI has with regard to nationalised lenders and the State Bank of India (SBI), under the Banking Companies (Acquisition and Transfer of Undertakings) Acts of 1970 and 1980 (Bank Nationalisation Acts) and the State Bank of India Act, 1955.

“Further, the RBI maintains the central fraud registry and banks report all frauds, involving amount above Rs 1 lakh, to the RBI. In addition, the RBI’s master directions on frauds lay out guidelines on categorisation, reporting and review of frauds, along with norms for consequent provisioning,” the finance ministry said in reply to a question on whether the RBI has adequate powers to regulate state-run banks.

“Thus, powers of the RBI are wide-ranging and comprehensive to deal with various situations that may emerge in all banks, including public sector banks,” the ministry said.

The RBI has been demanding more powers to regulate state-run banks, while the government has been maintaining that the powers available are adequate. The sparring over powers to regulate staterun lenders emerged after the alleged Nirav Modi-Mehul Choksi fraud at Punjab National Bank. The government and the RBI have previously sparred over the direction of interest rates.

In its reply to a Parliamentary panel earlier this year, the RBI had said the banking regulation Act, 1949 is a legislation aimed at regulating and supervising banking companies.

It said a banking company is defined in section 69 (c) of that Act as ‘any company’, which transacts the business of banking in India. State Bank of India and nationalised banks, which are PSBs, are not companies, but corporations formed by statutes. “They are therefore not ‘banking companies’. BR (banking regulation) Act does not apply to PSBs in full. Only those provisions of the BR Act specifically enumerated in section 51of the Act or elsewhere in that Act, apply to PSBs. This forms a great constraint for a regulator and superviser,” the RBI had said.