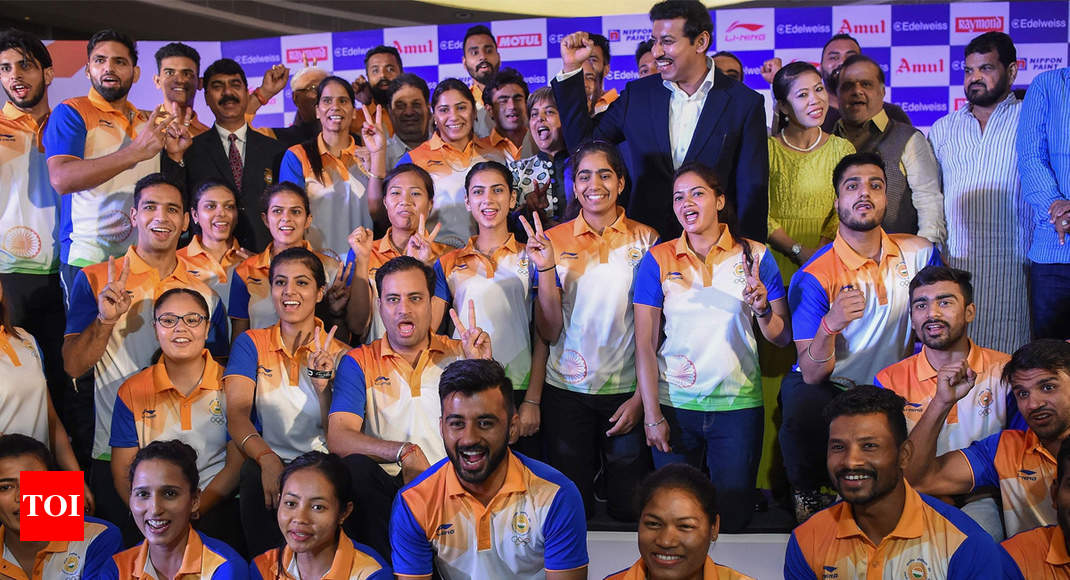 NEW DELHI: Sports Minister Rajyavardhan Singh Rathore on Friday asked the Indian athletes and officials, who are part of the Asian Games contingent, to behave responsibly on and off the field during the mega sporting event starting next week in Indonesia.

India is sending 800-plus contingent, including 572 athletes, to the Asian Games, to be held from August 18 to September 2 in the Indonesian cities of Jakarta and Palembang.

“It is a matter of great pride you (athletes) are representing the country in the Games and you have earned this privilege. When you take part in the Games and when you stay in the Games Village, you will lose your individual identity and your identity there is just one name that is ‘India’,” Rathore said at the send-off ceremony of the Indian contingent organised by the Indian Olympic Association here.

“It is a big responsibility for you. Whatever you do on the field and off the field, please remember one thing that you are representing a billion strong nation. You have to act with responsibility. Whether it is the athletes or officials, everybody should remember this all the time,” he added.

A few of the country’s top athletes, including hockey stalwart Sardar Singh, turned up at the ceremony. The four deputy Chefs de Mission, including RK Sacheti, were also introduced to the gathering.

Rathore said he hoped India would win more medals than the previous edition but urged the participating athletes not to think too much about the results.

“You have been preparing for years now and must be having dreams (to win medals). Now you are approaching nearer to your event. I would advise you to remain confident that those thousands of hours of your training and hard work will help you. Please don’t worry about the results too much and you should remain confident of your abilities. The results will come running after you,” he said.

“I have seen the courage and the confidence of Indian athletes have made a sea change as compared to the 1990s, whether it is a 15-year-old or a 40-year-old. I congratulate the IOA, the NSFs for preparing these athletes. We have to work collectively, nobody can work alone. Ultimately, it is for the good of Indian sports.”

He also thanked the IOA for giving visibility to the Sports Ministry and the Sports Authority of India in the send-off ceremony.

Later, speaking to reporters, Rathore said selection of the athletes for the Asian Games was the prerogative of the IOA and the NSFs, and the ministry would not want to interfere in it unless there were major discrepancies.

“Regarding the selection process of the Asian Games contingent, we will leave it to the IOA and NSFs. It is best not to have too many cooks involved in the process. So, the responsibility of selection (of athletes) lies with the IOA, but of course if major issues or discrepancies are brought up to us we will look into it,” said Rathore, himself an Olympic silver medallist shooter.

“We will pay due respect to what the IOA has recommended,” he added.

He said he was all for a system where sportspersons are given the highest priority.

“When I was an active sportsperson, I often heard that there is no money in the sports ministry. That is no longer the case. For the elite athletes, for those who are competing at the continental and world level, there will not be lack of money for funding.”

A few days back, Rathore had said that a games period will be made mandatory in schools after reducing the syllabus by 50 percent by next year.

Asked about that, he said, “HRD Minister (Prakash Javadekar) is looking into it. What I have heard from Javadekar ji is that by 2019, the syllabus will be reduced and a games period will be made mandatory.”

Addressing the gathering, Batra expressed hope that the country would return with more medals from the Asian Games than last time.

“We have named a 800-plus contingent, including 572 athletes and we will compete in 36 sports. I am hoping that we will get more medals then the last edition,” he said.

Mehta informed that main sponsors Edelweiss has agreed to extend the Rs 50 lakh life insurance cover to all the participating athletes.

Earlier, the insurance cover was only meant for athletes whose federations are affiliated to the IOA, leaving out players from minor sports like pencak silat, sambo, kurash among others.