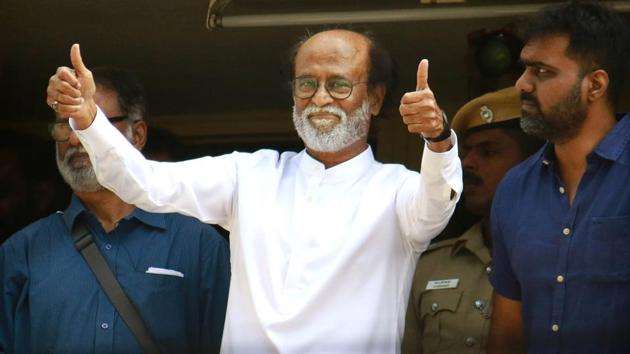 Superstar-turned-politician Rajinikanth on Wednesday evening called on DMK patriarch M Karunanidhi at his Gopalapuram residence and sought his blessings. DMK working president MK Stalin was also present during the visit described as a courtesy call.

After spending some 20 minutes with the DMK leaders, Rajinikanth told media persons that it was a courtesy call to extend his new year greetings to a “towering political personality.”

He said he had apprised the DMK chief of his political plunge and took his blessings.

“I also enquired about his health,” Rajinikanth said, refusing to answer any questions posed by the posse of media personnel.

Earlier outside his residence, Rajinikanth requested the media not to read any political meaning into his “courtesy call” on the Kalaignar.

The DMK leader is the first political leader the superstar met after announcing on December 31 his decision to form a political party.

Rajinikanth ducked the question on whether he would meet other political leaders as well. Stalin later told media persons that there was nothing new in Rajinikanth meeting Kalaignar, alluding to the fact that the superstar had even campaigned for the DMK in the 1996 Tamil Nadu assembly elections.

The DMK working President then went on to add “people know whoever tried to defeat Dravidian culture have met with failure.” His remark is perceived as a warning to the superstar against joining hands with the BJP, the party DMK accuses of destroying Tamil culture.

The BJP, which is trying to make its presence in the southern state, has been trying to woo Rajinikanth for his support.