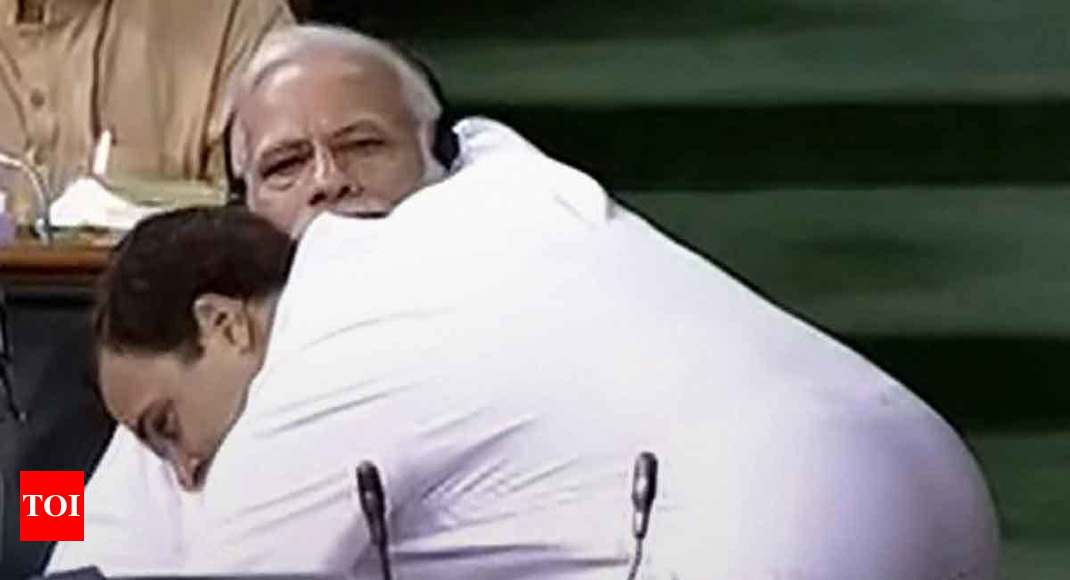 NEW DELHI: Thundering speeches are the norm in Parliament. But a hug and a wink? Not really. On Friday, when he crossed over to the treasury benches and gave Prime Minister Narendra Modi a surprise hug after his nearly hour-long speech, Congress chief Rahul Gandhi seemed to be making a statement about inclusivity, that divergent opinions are no cause for hatred.

What he pulled off may go down as audacious, but he intended it to underline how the Congress approach is not marked by anger. Rahul ended his speech saying he wasn’t angry with BJP which called him “Pappu” and “hated” him. Action followed words as he walked around the oval table dividing the treasury and opposition benches, reached Modi’s front-row seat at the far end, and hugged him.

As he walked away, a visibly disconcerted PM hurriedly called him back to shake his hand, pat him on the back and whisper in his ear. Rahul returned to his seat and, seemingly pleased with himself, winked to a colleague — which set off another avalanche of memes on social media.

The hug was the closing to a vehement hour-long attack on Modi, accusing him of favouring businessmen with defence deals and loan waivers rather than farmers. Rahul touched upon topics as wide-ranging as women’s safety and GST, but spent the bulk of his time on allegations of corruption in the Rafale deal, accusing defence minister Nirmala Sitharaman of “speaking an untruth” as she had refused to divulge details citing a secrecy agreement with France.

“Everybody understands the relationship the PM has with certain businessmen. Everyone understands and everybody can see the amount of money that goes into the marketing of India’s Prime Minister and everybody understands who it comes from,” Rahul said. He said the Prime Minister must explain why the contract was taken away from HAL, “away from the youngsters of Karnataka and given to a businessman with a debt of Rs 35,000 crore and who has never built an aeroplane in his life”.

His speech was punctuated with roars from the treasury benches, where members took exception to his allegations and naming of ministers. Both sides added to the uproar: Leader of the opposition Mallikarjun Kharge stood up to ask the Speaker to intervene; parliamentary affairs minister Anant Kumar Hedge decided to read from the rule book.

The show wasn’t without Rahul’s customary slips and faltering Hindi, which gave the treasury benches plenty of cause for laughter. The BJP office cheekily tweeted ‘Thank you for the entertainment’ after Rahul was done.

While Modi looked quite amused and smug most of the time, he did seem annoyed when Rahul persisted with “jumla strikes”, a reference to false promises, and painted him as a friend of the rich who “did not know what was in the hearts of the poor and the weak”. Rahul said he had a reason to thank BJP and RSS for teaching him how to be a Hindu. “This is what it means to be a Hindu. PM Modi and BJP have taught me what it means to be a Congress person, the meaning of being a real Indian, a devotee of Shiva and a real Hindu. For this, I thank them.”

A couple of hours later, Speaker Sumitra Mahajan rebuked Rahul in a “motherly” fashion for his public display of affection. “You (Congress members) might have liked it but I did not. And especially the way he (Rahul Gandhi) winked after hugging the PM,” Mahajan said, adding that Rahul was “like her son” but she also deemed it her duty as a mother to point out his breach of etiquette.