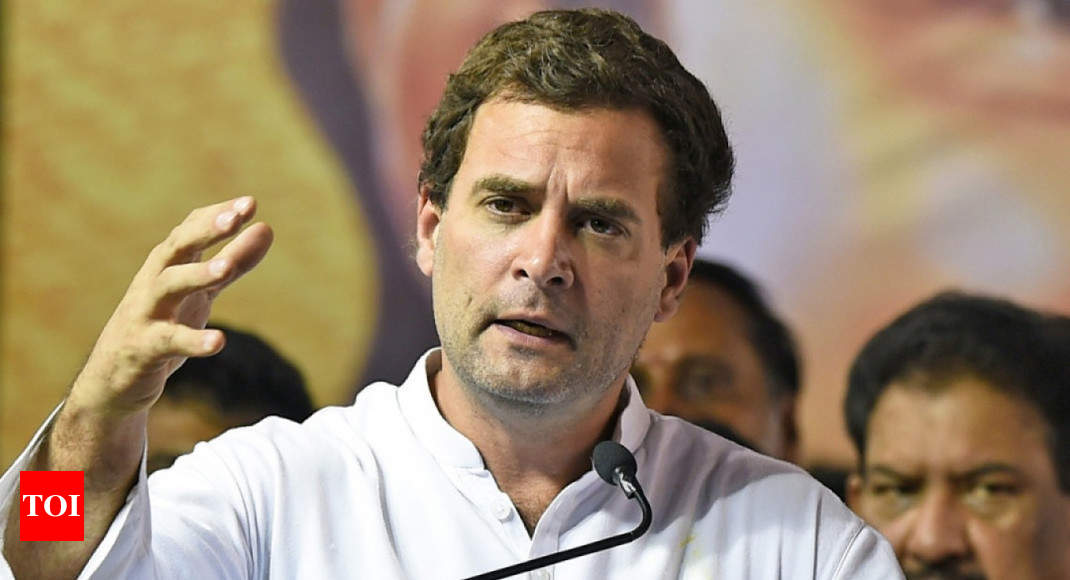 NEW DELHI. Congress president Rahul Gandhi on Tuesday tore into Prime Minister Narendra Modi for remaining silent over the alarming rise of rapes and crime against women in the country.
Speaking at the ‘Mahila Adhikar Sammelan’ in Delhi, Rahul said “PM Modi who is otherwise extremely vocal about multiple things and is hard to keep shut, doesn’t utter a single word when women are attacked and raped in our country.”

Citing incidents of crimes against women in the BJP ruled states, Rahul accused Modi of going soft against rape accused from his party.

“In UP and other BJP ruled states, when crimes are committed against women, PM Modi stays silent. No action is taken against the accused if he is a member of their party,” he said.

In UP and other BJP ruled states, when crimes are committed against women, PM Modi stays silent. No action is taken… https://t.co/m7EKFY4LBQ

Taunting the Modi government over their ‘Beti Bachao, Beti Padhao’ slogan, Rahul said it was the BJP ministers that posed danger for girls.

“They said ‘Beti Bachao Beti Padhao’. I cannot understand from whom. Is it the BJP MLAs that daughters need to be saved from?” he asked mockingly.

The daughters need to be saved from BJP MLAs: Congress President Rahul Gandhi at at Mahila Adhikar Sammelan #Delhi https://t.co/1DhVNUufaU

Continuing his tirade against PM Modi, Rahul claimed that the 4-year rule of the BJP government since 2014 was far worse than Congress rule or women in the country.

“What happened against women in these four years is something which didn’t happen even in last 70 years,” he said.

The Congress chief also tried to corner the government over “stalling” the Women’s Reservation Bill, saying the ideology of BJP’s parent organization RSS was that “only men should run the country and the only place for women is at the back.”

“They talk a lot about empowering women, but the Women’s Reservation Bill is long pending. The truth is that they and the RSS want only men in the parliament. If they table the bill, we will give them full support but if they don’t, then as soon as Congress party comes to the power after next year’s general elections, we will pass the bill,” he said.

They talk a lot but Women’s Reservation Bill is long pending. Congress told them clearly that the entire party will… https://t.co/lMrwkORyOj

Rahul ended his address by expressing happiness over opposition parties uniting with the Congress to defeat the BJP.

I’m very happy to say, that Congress party and other opposition parties are working together to defeat BJP: Congres… https://t.co/XFktMXlZEc

“The democratic institutions of the country are under attack by the BJP. It is the duty of the Congress party and opposition, particularly women in the parties, to defend these institutions,” he said.