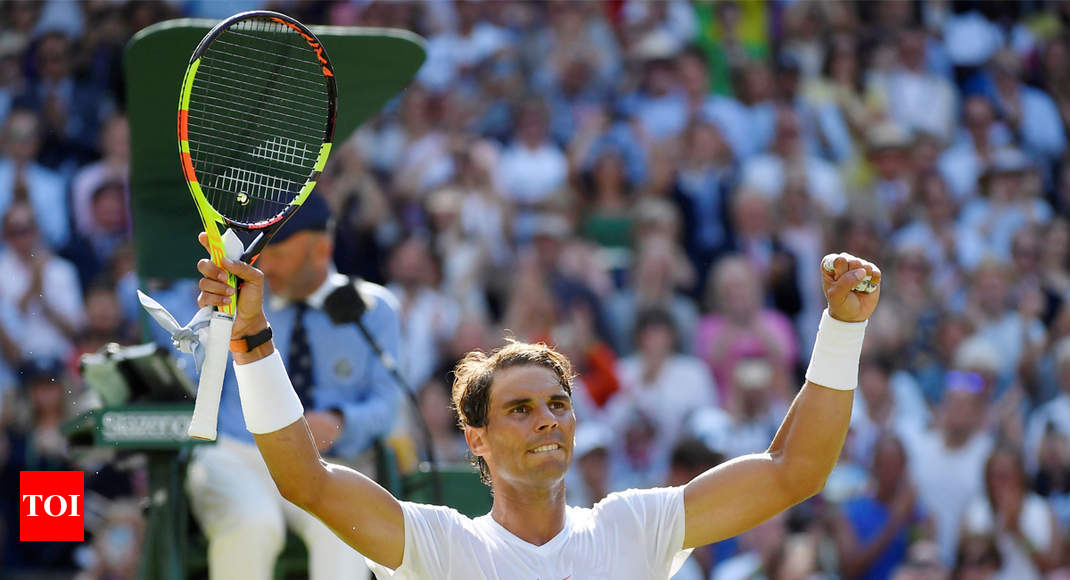 LONDON: World number one Rafael Nadal breezed into the Wimbledon second round on Tuesday with a 6-3, 6-3, 6-2 win over Israel’s Dudi Sela as the Spaniard returned to action for the first time since claiming his 11th French Open title.

Nadal, the Wimbledon champion in 2008 and 2010, also managed to avoid falling victim to a player ranked outside the world top 100 for what would have been the fifth time in his last six visits to the All England Club.

“I’m just happy to be through of course and yes, this match gives me positive feelings. There’s still room to improve but after a while without playing on grass, of course it’s very important to start with a straight sets victory.”

Nadal, the 17-time major winner, has not got past the fourth round since finishing runner-up to Novak Djokovic in 2011.

Del Potro, who made the semi-finals in 2013, next faces Feliciano Lopez of Spain who on Tuesday set a record of playing 66 consecutive Grand Slams when he eased past Federico Delbonis of Argentina 6-3, 6-4, 6-2.

Left-handed Lopez made his debut at the majors at the 2001 French Open.

On Tuesday, the 36-year-old broke the record for straight Slams which was previously held by Roger Federer.

“When I was about to break the record, I thought, wow, I’m going to beat Federer at something!” joked the 70th-ranked Lopez who has lost all 13 matches he has played against Federer in his career.

Zverev, who made the last 16 in 2017, goes on to face Taylor Fritz of the United States.

Muguruza is bidding to reach her third Wimbledon final after winning last year’s title match against Venus Williams and losing the 2015 showpiece against Serena Williams.

Eugenie Bouchard, the runner-up in 2014 before her career went into a tailspin, reached the second round with a 6-0, 4-6, 6-3 victory over British wild card Gabriella Taylor.

Bouchard, now ranked 188 in the world, will face fellow former Wimbledon junior champion Ashleigh Barty for a spot in the last 32.

Belgium’s David Goffin, the 10th seed, slumped to a 6-4, 6-3, 6-4 loss to Australia’s Matthew Ebden, playing the tournament for the first time in three years.

Three-time winner Djokovic starts against Tennys Sandgren of the United States, returning to the tournament which ended in an injury-enforced quarter-final withdrawal 12 months ago.

Djokovic, a 12-time Grand Slam champion, will move into the top five for all-time match wins at Wimbledon if he beats Australian Open quarter-finalist Sandgren.

Sharapova, the 2004 Wimbledon champion and five-time major winner, returns to the tournament for the first time since 2015.

The former world number one missed the 2016 event as she served a doping ban and was injured last year when she was planning to appear in the qualifying event.

Sharapova, seeded 24, starts against fellow Russian Vitalia Diatchenko, ranked at 132 and who came through qualifying.

Halep’s best run at Wimbledon was a semi-final spot in 2014.

Ex-world number two Zvonareva, one of a number of tennis mums at the tournament and now ranked 142, came through qualifying to make the main draw for the first time since 2014.