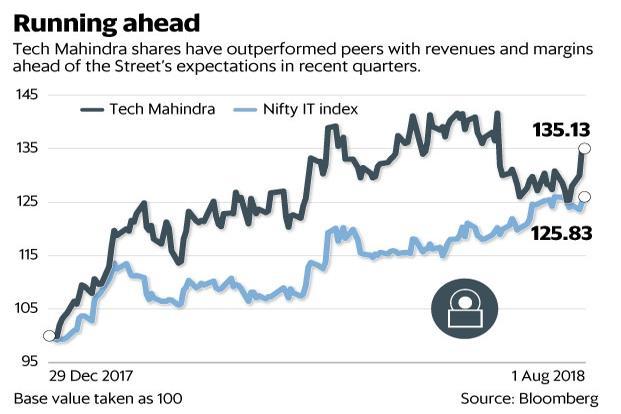 Tech Mahindra’s Q1 results showed that while revenues from the telecom segment declined as expected, the enterprise business grew by a strong 3.8% sequentially. Photo: Mint

Tech Mahindra Ltd’s shares had underperformed peers in the past one month on concerns about growth in the near-term. Analysts, in fact, had estimated revenues to drop 1% sequentially in constant currency largely because of pressure in the telecom vertical. But as it turned out, things weren’t as bad as expected. Revenues rose 0.3% sequentially in the June quarter. While revenues from the telecom segment declined as expected, the enterprise business grew by a strong 3.8% sequentially.

While this segment is expected to continue driving overall growth for the company, investors were also enthused by the company’s comments that some large deal wins can potentially drive growth in the telecom segment as well going forward.

“Tech Mahindra is optimistic about a revival in revenue growth in telecom after staying weak for the last five quarters. The confidence is coming from a) ramp-up in deals won in 4QFY18 ($300 million worth deal wins had a higher share of telecom deals) and b) strong deal wins in 2QFY19; Tech Mahindra indicated a $200 million of net new deal wins so far in the quarter. This bodes well for FY20 dollar revenue growth outlook,” analysts at JM Financial Institutional Equities said in a note to clients.

In addition, there are expectations that increased spending by global telecoms service providers on 5G deployment will result in increased demand for Tech Mahindra.

Needless to say, the company’s optimism needs to translate into actual results for investors to gain more confidence about the recovery in the telecom vertical. Nonetheless, the company’s shares rose nearly 4% on Tuesday, since the June quarter results weren’t as bad as what was initially feared.