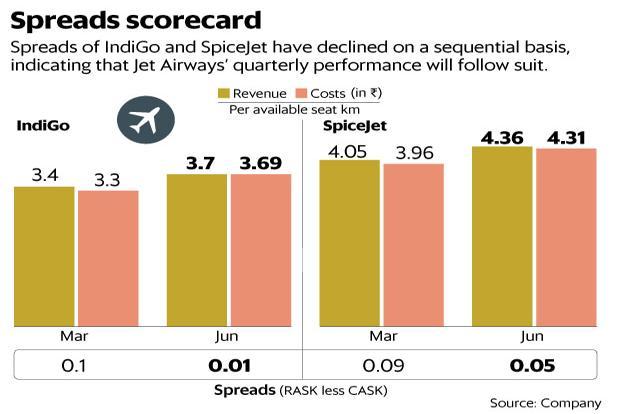 The spreads of IndiGo and SpiceJet have declined on a sequential basis, indicating that Jet Airways’ quarterly performance will follow suit. Graphic: Mint

SpiceJet Ltd’s June quarter (Q1) results are far from impressive. Profits have declined even as revenues have increased. The main problem is that spreads are under pressure. Spreads (RASK less CASK) declined compared to the March quarter. RASK is revenue per available seat kilometre and CASK stands for costs per available seat km; these are unit measurements for airlines.

The same trend was seen in market leader InterGlobe Aviation Ltd’s (that runs IndiGo) performance over the past two quarters. What this means is that investors can expect similar trends as far as Jet Airways (India) Ltd’s performance is concerned, when the airline announces its June quarter earnings.

SpiceJet’s fuel CASK increased as much as 11% on a sequential basis. There was no respite on CASK excluding fuel costs too, which increased 7% compared to the March quarter. The airline’s other expenses increased sharply in the June quarter and included a net foreign exchange loss owing to the depreciation of the rupee. The upshot—reported pre-tax profit before exceptional items declined 86% over the same period last year to ₹25 crore and 45% sequentially.

So far this fiscal year, stocks of all three listed airlines have underperformed the broader market, as cost pressures (led by high fuel prices and depreciation of the rupee) and intense competition cloud performance.

Of course, shares of Jet Airways have fallen more rapidly given the investor concerns on deferment of Q1 results and negative news flow surrounding its financial health.

Even as SpiceJet has done relatively better on the yields front, pricing has remained a concern for the price-sensitive Indian aviation market.

“This is not a market where pricing is based on a cost-plus model,” said Kiran Koteshwar, chief financial officer at SpiceJet. Further, in this industry, the booking curve starts two-three months in advance and hence any disruptions in costs, such as the rupee depreciation and increase in oil prices, can’t be compensated, he added.

As a result, a sharp increase in fares in reaction to the sudden changes in costs is not possible. “However, we have been able to demonstrate superior revenue performance to absorb the increase in costs,” said Koteshwar. For the June quarter, SpiceJet’s revenue increased 20% and 10% on a year-on-year and quarter-on-quarter basis, respectively.

Nonetheless, it doesn’t get easy from here, what with the rupee continuing to remain weak. Additionally, crude oil prices remain elevated. The September quarter is anyway a lean one for the sector. These factors should keep sentiments for airline stocks muted. The SpiceJet stock is no exception to these woes.