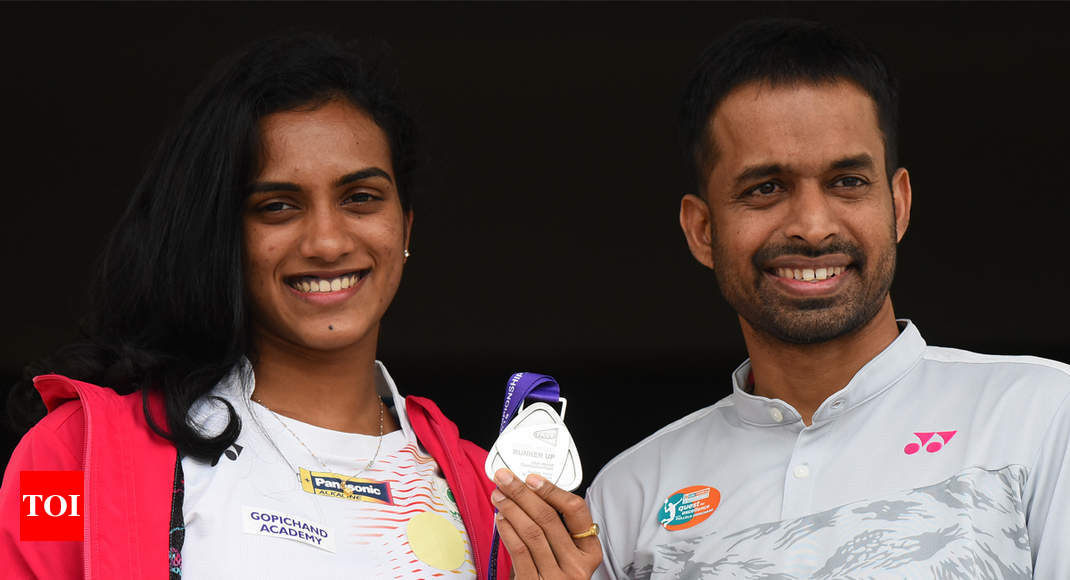 HYDERABAD: For PV Sindhu, the World Championship gold medal has been so near yet so far. The Hyderabad shuttler, however, was categorical in ruling out any “final phobia” for her 21-19, 21-10 defeat to Spaniard Carolina Marin.

Addressing the media at the Pullela Gopichand Academy in Gachibowli on Tuesday, Sindhu said, “Definitely everyone plays to win gold. The World Championship is a big tournament. I gave it my 100%. I need to take it positively, I am happy to win silver, but definitely need to improve on my mistakes,” she said. The world No.2 Indian is now geared up for the Asian Games. “I’ve played Marin several times. It would have been different had I won the first game. But I will take this confidence to the Asian Games and I hope to do well.”

Coach Pullela Gopichand gave his perspective on Sindhu’s loss. “It’s very easy to focus on the last match, forgetting about the great semifinal (Akane Yamaguchi), quarterfinal (Nozomi Okuhara) and pre-quarterfinal matches (Ji Hyun Sung) Sindhu played. She has put in a lot of good work and credit to her for fighting back in quarters and semis. The mental strength she showed in semis and quarters is what we should remember before bisecting the final as a standalone. That is what I’d want Sindhu to think, because it’s easy to forget the good work and focus on negatives. There are a lot of positives to take from the tournament,” Gopi said.

Dwelling on the Nanjing final, Gopi said, “Sindhu should have wrapped up the first game. The first 15 points of the match were different. Sindhu dominated and was confident. There was a lapse, maybe for a minute. In a big match, little momentum shifts can turn the tide. Definitely, we need to learn our lessons, but we can’t forget the good work done in the match,” Gopi added.

The coach was pleased with the overall performance. “For the first time, four of our players reached quarterfinals this time. The doubles players, including Ashwini Ponnappa, Satwiksairaj Rankireddy and Chirag Shetty played well. Saina Nehwal beating Ratchanok was very good too. Against Saina, I thought Marin played exceptionally well. Srikanth and Prannoy should have played better,” he added.