The Pro Kabaddi League 2018 action resumed on Tuesday after a day’s break in Patna as the first match of the night saw the Puneri Paltan take on Gujarat Fortunegiants at the Patliputra Sports Complex in Patna, Bihar. 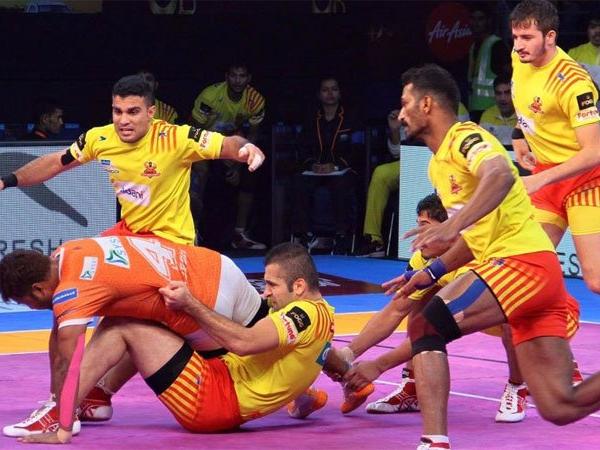 Puneri Paltan came into the match on the back of a couple of losses in the final stretch of their home leg at the Balewadi Stadium. Nitin Tomar has been their leading scorer on the mat for the Paltan with his calm, collected raids, and features in the top three raiders in the league.

He has, however, been lacking support in the raiding department but hoped that GB More will play his part well on Tuesday night. The defence has been a positive for the Puneri Paltan with the likes of Ravi Kumar and Rinku Narwal doing well in the absence of their captain Girish Maruti Ernak on the mat. The all-rounders Akshay Jadhav and Monu have also shown promise with their contributions for the side.

After starting slow, the Gujarat Fortunegiants got into their element with two wins on the trot. The raiding unit has been a strong one for them with the likes of Sachin Tanwar, Ajay Kumar, K Prapanjan and Mahendra Ganesh Rajput working well in tandem. The defence is a fairly young one but has done well under the coach Manpreet Singh’s guidance.

The captain Sunil Kumar has led the defence well and combined with Parvesh Bhainswal in the cover position. The corners are a young duo of Ruturaj Koravi and Sachin Vittala who have shown a lot of promise for the finalists of last year’s Pro Kabaddi League.

Puneri Paltan lost their third match in a row as a strong defensive showing from Gujarat Fortunegiants saw them win 37-27 on the night.

Here are the player ratings from PKL6 Match No. 39 between Pune and Gujarat:

The leading raider for the Puneri Paltan had a lukewarm game for his high standards as he scored just 6 raid points on the night. He went off with a slight ankle issue in the second half of the match. Tomar became the first raider this season to score 100 points.

The supporting raider for the Puneri Paltan could not do much and ended up with just one raid point in the entire match. He was subbed off towards the end of the first half and Parvesh replaced him in the lineup.

The all-rounder struggled to get going in the defence and could not produce many tackles. He scored one raid point when he earned a bonus point in the second half.

Monu had a difficult time in his raiding, getting caught on a number of occasions. He did manage one raid point and had a tackle point to his name as well.

The cover defender continued his good form on the mat from the past matches as he was involved in the execution of all the Super Tackles. He ended up with four tackle points on the night.

The defender did well with his strong ankle holds on the left corner of the Puneri Paltan backline. He combined well with the defenders on the mat.

The hyper-active Sandeep Narwal came back into the lineup and had a decent outing, scoring two tackle points from the right corner. He even scored a raid point.

The young all-rounder came on towards the end of the first half and did well with his chances as he scored five points, with three tackle points and two raid points.