Preview: Jaipur Pink Panthers take on fellow Zone A challengers Gujarat Fortunegiants in the first of their three games this season at the Shaheed Vijay Singh Pathik Sports Complex on Friday. 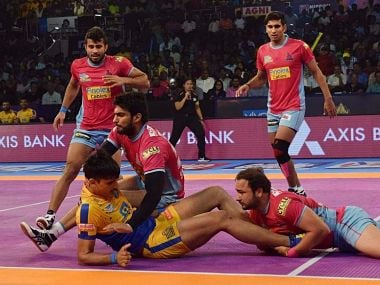 The two sides have produced close contests in their three encounters so far with the margin of victory never exceeding 7 points for either team.

They will look to come out on top once again as they aim to consolidate their position in the top half of Zone A.

Jaipur Pink Panthers suffered a loss to Bengal Warriors in their previous match and will be keen to make amends.

Deepak Niwas Hooda, though, has inspired confidence as their lead player and returned 8 raid points against Bengal Warriors.

Sandeep Kumar Dhull and Mohit Chhillar managed five out of the seven tackle points in that outing and will likely emerge as key again when they face Gujarat Fortunegiants.

UP Yoddha vs Tamil Thalaivas

Having won the first encounter between the sides this season, UP Yoddha will look beat Tamil Thalaivas and win the first Pro Kabaddi match in Greater Noida as they seek to go top of their zone. UP Yoddha have succumbed to defeat only once and have come out on top in two encounters in their four meetings so far in Pro Kabaddi.

The two sides have always produced close encounters and another one will mean the fans are in for a treat.

UP Yoddha put in a brilliant raiding performance as they narrowly beat Dabang Delhi KC in their previous match.

The duo accounted for 23 of the 25 raid points in the match, which means Tamil Thalaivas will have to bolster their defence against them.

UP Yoddha will hope for another strong performance from the two as they seek a second victory over Tamil Thalaivas this season.