“Priyanka Chopra and Nick Jonas, are they dating?” read a comment on their pictures, which are trending big time today. The pictures have reportedly been taken during their outing in Los Angeles. Both Priyanka and Nick are seen sitting next to each other and are accompanied by several other friends. The Internet has chanced upon two pictures of the stars – one appears to be taken during a group lunch and in the other they are enjoying a boat ride. “Seems they are dating” is what one section of the people think while the others have declared that the duo are surely in dating.

This is not the first time that Priyanka Chopra has been linked to Nick Jonas. She took the internet by storm when she made her debut at the MET Gala 2017. A fresh set of pictures were shared by Nick Jonas on his Instagram stories where he was seen next to Priyanka Chopra and couple of friends on a yacht.

Priyanka Chopra has always been secretive about her love life. Ever since the actress began her career in Hollywood, she has been linked with many celebrities. The latest one happens to be Nick Jonas.

Tongues have been wagging about Priyanka Chopra and Nick Jonas being a twosome. Yesterday, snapshots of PeeCee and the American actor-singer, aboard a yacht, did the rounds of social media. The two are seen sharing a quilt.

The ‘Jealous’ singer and the ‘Quantico’ actress – who have been friends for some time – have set tongues wagging after they spent the Memorial Day long weekend together where they were spotted hanging out for all to see on several occasions. 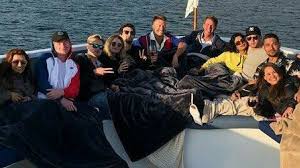 Priyanka, 35, and Nick, 25, went to see the ‘Beauty and the Beast’ live show at the Hollywood Bowl on Friday (25.5.18) before going to watch the Los Angeles Dodgers baseball game against the San Diego Padres the next day.

A source at the game told Us Weekly magazine: “Priyanka and Nick were talking really closely and were very smiley and very happy. They weren’t trying to be private as they were in a pretty public place, but they were talking to people around them, sitting closely and they both just seemed super happy.”

The pair then rounded off the weekend with a boat trip together on the Pacific Ocean.