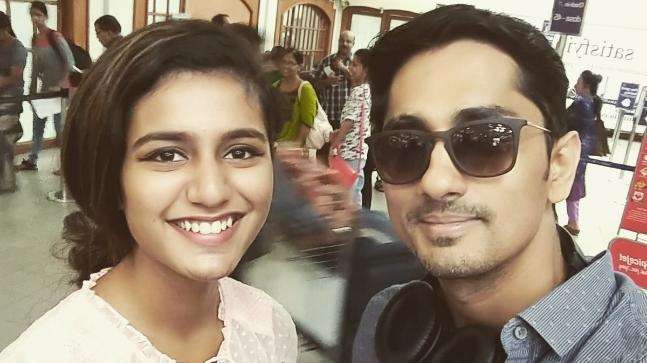 Actress Priya Prakash Varrier took the entire country by storm with her adorable wink and eyebrow dance. Ever since the song Manikya Malaraya Poovi from Oru Adaar Love went viral, she has become one of the most sought-after actresses in the country.

Varrier has been the talk of the town and today, she met one of the most handsome actors of South cinema.

We are unsure whether they will team up for a film or not. From the looks of it, this seems like a casual meet between the two. Nevertheless, it would be interesting to see these two talented actors in a film.

Meanwhile, Siddharth is upbeat about his Malayalam debut, Kammara Sambhavam with actor Dileep. The actor has learnt the language to dub for his character.

Recently, the audio of Kammara Sambhavam was launched and at the event, Dileep shared some interesting anecdotes.