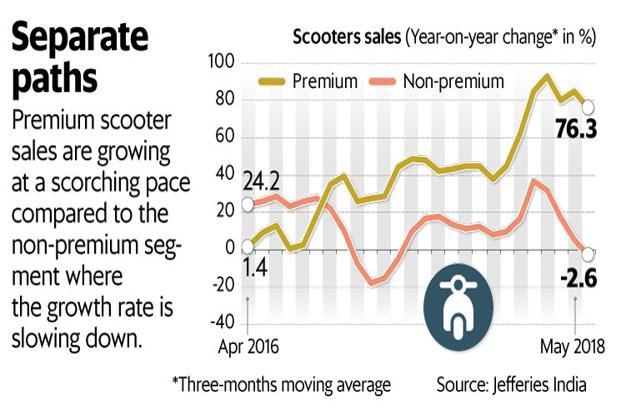 After premium motorcycles, it is now the turn of premium scooters to be in the spotlight. In the last nine months, growth rates of premium scooters (engine size of 125cc and above) have powered ahead, leaving their non-premium counterparts behind. There is a clear divergence between the two.

Since January, monthly sales for premium scooters have been growing at a scorching pace of 80% when compared to the corresponding year-ago period. On the contrary, non-premium scooters—which are mass-market two-wheelers and reckoned to be convenient for urban commuters—have seen weakness. In March, year-on-year growth almost halved to 17% from 32.1% in February. In April, growth slowed to 5.3% year-on-year and then contracted by 2.6% in May (see chart).

As a result of higher demand for premium scooters, their share has zoomed to 19% of total scooter sales, from 8-10% in the six months ended September 2017. The reasons of customer preference for higher torque and style are pretty similar to those for premium motorcycles. Note that this column had highlighted the meteoric growth rates in premium motorcycles, a trend that was seen almost a year ago.

Another reason may be that scooters have evolved from being staid, safe and preferred by the older generation to fancy vehicles with flashy features fancied by the youth. In fact, two new models, Honda Grazia and TVS Ntorq, have pushed up sales, even as Hero’s Duet and Maestro are gearing up to hit the premium segment. Meanwhile, the relatively older brand Suzuki Access has expanded market share significantly, adding to growth in the premium segment.

Premium scooters are 10-20% less fuel efficient and cost more too. Yet, this has not deterred demand growth.

A report by Jefferies India Pvt. Ltd points out that two-wheeler firms are adopting branding strategies to make hay while the sun shines.

Certainly, this calls for huge marketing and advertising expenses. “History suggests that it is incredibly difficult to establish a new successful brand in two-wheelers in India, with one success out of every 31 launches seen between FY2014-18,” adds the report.

Neither the risk of failure nor the costs involved has held back two-wheeler makers from flooding the markets given the robust demand, especially in urban areas. Also, it seems this is where the profits are, although most companies do not share the break-up.

Slowing growth in non-premium scooters is a clear sign of shift in customer preference towards premium vehicles rather than demand expansion for scooters as a whole. The fact that growth in scooters as a whole has slowed down in the recent past with only premium category zooming also bears out this trend.