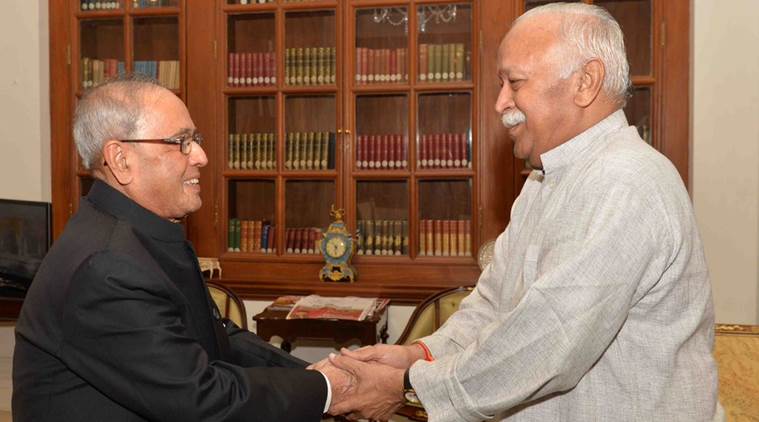 Former president Pranab Mukherjee will be addressing the valedictory function of the Rashtriya Swayamsevak Sangh’s (RSS) Sangh Shiksha Varg—a training camp for the volunteers—at its headquarters in Nagpur on 7 June and this has led to a controversy considering his loyalties with Congress. The valedictory programme is presided over by a well-known personality from any field where the chief guest delivers his speech on the concluding day. However, the invite to Mukherjee isn’t a one-off. According to a report in The Indian Express, the “RSS has been known to invite people not ascribing to its ideology”. One of the earliest such examples is from 1993 when former Central Provinces home minister Sir Moropant Joshi was invited during  KB Hedgewar’s time.

Apart from that, the RSS often refers to a voluntary visit to the Wardha RSS camp by Mahatma Gandhi on 25 December 1934. It is no surprise then that Gandhian health activist Abhay Bang has also been one of the former chief guests at the RSS event.

However, it was in 2007, when former Air Chief Marshal AY Tipnis was invited to the Nagpur camp by then Sarsanghchalak K S Sudarshan. Without targeting the RSS directly, “Tipnis raised eyebrows as he delivered a veiled critique dealing with secularism, tolerance and faith in the Constitution which led to a point-by-point rebuttal by Sudarshan”,

As per the report, RSS joint spokesperson Narinder Thakur in a statement said that even former prime minister Jawaharlal Nehru had invited its workers for the Republic Day parade in 1963, as he was impressed by their work.

The Sangh Shiksha Varg of RSS is an annual event held at its headquarters in Nagpur. Started in 1927 by its founder KB Hedgewar, it was initially called Officers’ Training Camp (OTC) but MS Golwalkar, the second RSS chief, renamed it as Sangh Shiksha Varg.

The event to which the RSS has invited former President Pranab Mukherjee, Sangh Shiksha Varg, is an annual training camp, meant for recruits in their third year in the organisation, although some can also attend it later. Mukherjee, a veteran of the Congress before he became President in 2012, has been invited as chief guest.

Training camps
The RSS holds training camps for first-, second- and third-year swayamsewaks. The first-year camp, for beginners, is a 20-day event held in each of the 42 state units (prants). Earlier, most newcomers could attend these camps but the growth of the RSS since the BJP came to power has led to conditions being introduced; the list is scrutinised at district level before being cleared.

The second-year camp, again of 20 days, is organised at the level of kshetra, with each kshetra comprising a number of prants. The RSS has 11 kshetras.