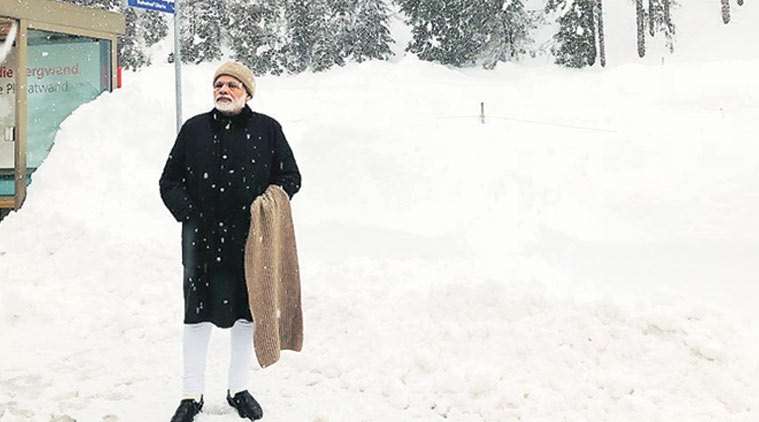 On a cold, dreary day marked by heavy snowfall at this Swiss ski resort, a traffic pile-up on the road from Zurich to Davos disrupted the schedule of delegates arriving for the World Economic Forum. But the Indian delegation was basking in the glow of the International Monetary Fund’s projection that India could emerge as the fastest-growing country in the world in 2018 at 7.4 per cent, leaving China behind at 6.6 per cent.

In its global growth prospects survey, released on the eve of Prime Minister Narendra Modi’s address to a global audience here, the IMF said that India could grow at 7.8% in 2019. For the Indian delegation, the numbers came as an endorsement of the assessment that India is on track to shake off the disruptive effects of the note ban in 2016 and the glitches in implementation of the GST last year.

The numbers are expected to bolster the case of the government, which is seeking to engage further with global investors to showcase the country’s investment potential and ease of doing business. They also follow the recent improvement in India’s rankings, up to 100 on the pecking order, by the World Bank. The IMF’s projection, presented by its chief Christian Lagarde Monday, comes on top of the World Bank’s assessment of India growing at a faster clip in 2018 at a time when the country’s statistics office has projected that the economy may grow only 6.5 % in fiscal 2018 — the lowest in the three-year term of this government.

The projection of a growth uptick couldn’t have come at a more opportune time — before Modi met several members of the International Business Council after arriving in Davos Monday.

It also comes on the eve of the World Economic Forum meeting, with the global economy enjoying a growth spike with increased trade and investment, exactly a decade after the financial crisis of 2008. The IMF has raised the global growth forecast for 2018 and 2019 to 3.9 per cent, and a notch higher for Europe, especially with the sharp corporate tax cuts announced by the Donald Trump administration — from 35 per cent to 21 per cent.

A hike in global growth matters significantly for India — and not just because of the prospects for exports. When global growth was high in the years before 2008, the country benefited in terms of trade, investment and capital flows leading to an average growth of over 8 per cent in the first five years of the UPA government. But the flip side could be that with the tax break, US firms may be tempted to put in more money and create more jobs in their country.

However, a dampener was the WEF’s annual inclusive index, which placed India at 62, far below countries such as Sri Lanka, Bangladesh, Nepal and China in terms of inclusive growth. The index reflects progress on growth and development, inclusion and inter-generational equity. and takes into account living standards, environmental sustainablity and protection of future generations from indentedness.

A sobering touch also came from PWC survey of over 1300 CEOs, which listed the US at the top as the most attractive market in 2018 folllowed by China — India was at the fifth spot.

In Davos, what India is expected to pitch again is an economy on the growth path, an attractive market in a host of sectors and a young nation. The pitch by the Prime Minister comes at a time when there is little room for a stimulus — fiscal or monetary — with bets on whether the government will be able to meet its fiscal deficit target of 3.2 per cent for this fiscal.

Many here are also looking for a signal from Modi of his government’s reform intentions, and engagement with investors and the world. With around 15 months to go for this government to complete its five-year term, it’s all set to present its last full-fledged Budget.

Providing a global perspective on new economic narratives will be former RBI governor Raghuram Rajan, who is now teaching at Chicago University’s Booth School of Business, and Robert Shiller, with sessions on cyber security, climate changes and big data among the subjects on the agenda.

The government’s three-year term has been marked by relative fiscal conservatism in the face of demands for a stimulus to revive growth, which has slipped since 2015-16. In Davos, investors are bound to ask questions, especially given the agrarian crisis in many parts of the country and rising demand to address the issue of farm prices. The other challenge for a growth pick-up is higher oil prices.