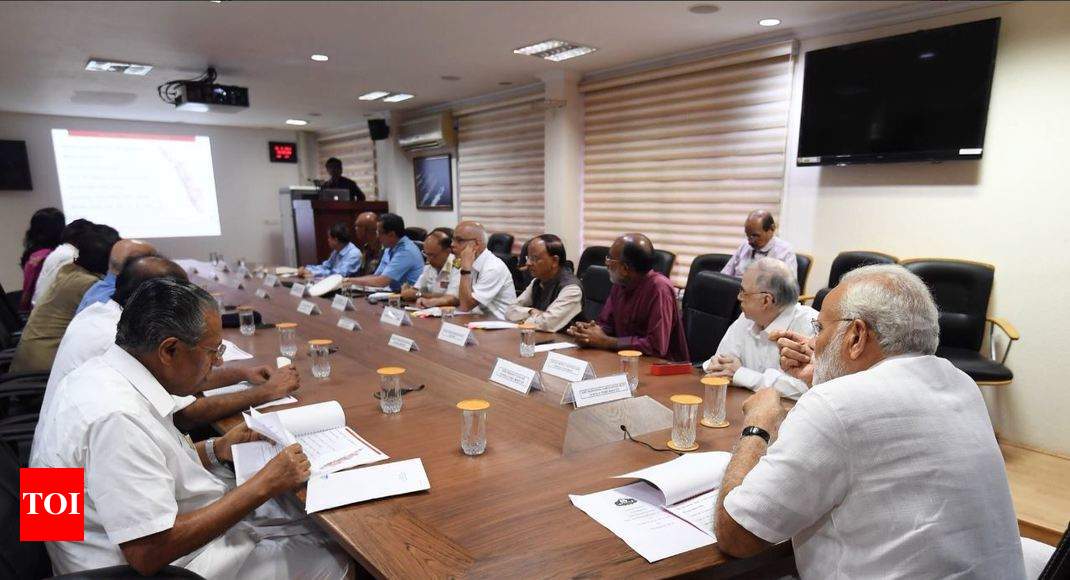 THIRUVANANTHAPURAM: Prime Minister Narendra Modi announced today an immediate financial assistance of Rs 500 crore to the rain-battered Kerala, after reviewing the flood situation in the state.
Modi also announced an ex-gratia of Rs 2 lakh per person to the next of kin of the deceased and Rs 50,000 to those seriously injured from the Prime Minister’s National Relief Fund (PMNRF), a Prime Minister’s Office (PMO) statement said.

“The prime minister announced a financial assistance of Rs 500 crore to the state. This is in addition to Rs 100 crore announced by home minister Rajnath Singh on August 12,” it said.

After a high-level review meeting in Kochi, the prime minister made an aerial assessment of the damage caused due to floods in some of the affected areas of the southern state.

Expressing grief over the unfortunate deaths and damage caused to property due to floods, the prime minister observed that rescue of people who are still marooned remains the topmost priority.

“As per the initial estimate, the state has suffered a loss of Rs 19,512 crore. The actual loss can be ascertained after the water recedes in the affected areas. The state has sought an immediate assistance of Rs 2,000 crore,” he said.

Modi, who reached the state capital last night, proceeded to Kochi in the morning and reviewed the flood situation during a meeting with Vijayan and the state government officials.

The prime minister’s visit comes a week after home minister Rajnath Singh visited the state and conducted an aerial survey of the flood-hit areas.

Modi also assured the state government that relief materials, including food grains and medicines, would be provided, as requested.

Insurance companies have been asked to hold special camps for assessment and timely release of compensation to the affected families and beneficiaries under social security schemes and directions have been issued for early clearance of claims under the Fasal Bima Yojana to agriculturists.

The prime minister also directed the National Highways Authority of India (NHAI) to repair the main national highways damaged due to the floods on a priority basis.

The central public sector undertaking like the NTPC and the PGCIL have been asked to render all possible assistance to the state government in restoring power lines.

Villagers, whose ‘kutcha’ houses have been destroyed in the devastating floods, would be provided the Pradhan Mantri Awas Yojana-Gramin homes on a priority basis.

Under the Mahatma Gandhi National Rural Employment Gurantee scheme 5.5 crore person days have been sanctioned in the labour budget 2018-19.

Any further request for incurring the person days would be considered as per the requirement projected by the state.

Under the Mission for the Integrated Development of Horticulture, farmers would be provided assistance for replantation of damaged horticulture crops.

The prime minister also complimented the state government for the efforts made in meeting the challenges of the unprecedented situation, the PMO statement added.

Meanwhile, rains lashing several parts of the state since this morning is causing concern as it could hamper the rescue and relief operations.

As per information from the control room of the State Disaster Management, since August 8, 194 persons have lost their lives so far and 36 are missing.

Over 3.14 lakh people have been moved to relief camps.