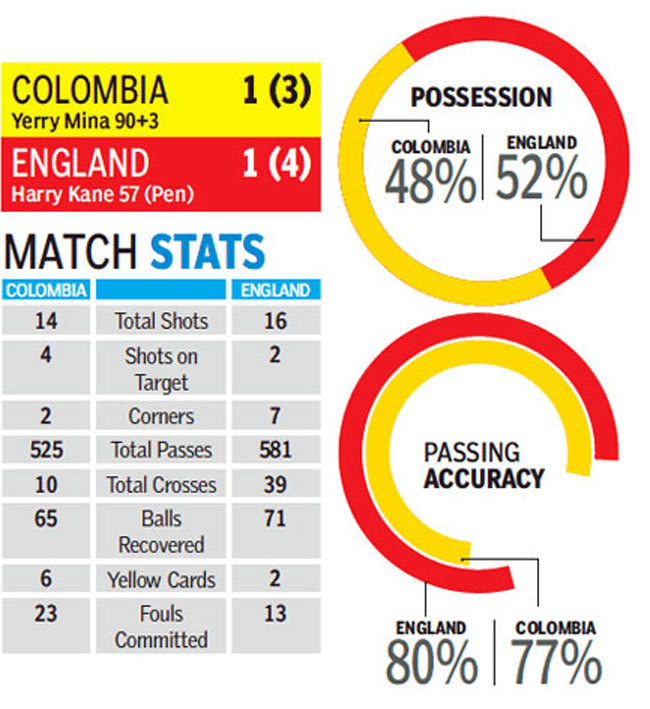 MOSCOW: Radamel Falcao can scream and holler and vent his frustration as much as he wants, but the Colombian captain will surely realise after the embers die down, that at Spartak on Tuesday, Colombia’s maiden attempt at playing football without talismanic and injured James Rodriguez was first observed in the 92nd minute of the World Cup pre-quarterfinal match.

Against England, Mateus Uribe let fly a cracker of a shot from 25 yards away, and Jordan Pickford flung himself across the goal to make a superb finger-tip save, knowing little that more heroics were in store. From the ensuing corner, Yerry Mina brought Colombia back into the game with a header and forced England to a penalty shootout. It was from an early spot-kick that captain Harry Kane had converted to give England the lead.

Till that Mina moment, all Colombia did was stack up fouls that earned them six yellow cards, innumerable stoppages, two lengthy brawls and a forgettable performance, if one considers the benchmark France and Brazil have set.

It was an unforgettable night for England though. When Eric Dier’s fifth penalty eluded David Ospina, the myth that England cannot win a World Cup shootout was debunked. Stuart Pearce and David Beckham must have breathed a huge sigh of relief. Glenn Hoddle, present in the terraces, threw his hands up in glee and Danny Murphy screamed to release pent-up agony.

England flunked from the spot in World Cup semifinal in 1990 against West Germany, in 1998 Round-of-16 match against Argentina and in 2006 quarterfinal against Portugal. This was their first knockout victory in a World Cup in 12 years. It was only their seventh, in any major tournament, since 1966, and now they face Sweden on Saturday for the right to play Russia or Croatia in the semifinals. It was Pickford who set the tone with a brilliant reflex save with his left hand to steer away Carlos Bacca’s shot to make it 3-3. Dier took the last kick after Kane, Marcus Rashford and Kieren Trippier kept England in the hunt. Jordan Henderson’s shot was saved by Ospina but Uribe wasted the opportunity by hitting the post.

It’s turning out to be England captain’s long shootout journey. In this topsy-turvy tournament which has already seen Lionel Messi and Cristiano Ronaldo miss from the spot, Kane has been flawless from the 12-yard mark. On the six occasions he has found the net, three were penalty conversions.

“It gives us huge belief. We’ve ticked one of the boxes so far. There’s still a long way to go. This will give us more belief than ever and give the fans back at home more belief than ever. We’re just looking forward to the next one,” the Tottenham Hotspur striker said after the end of the bruising and nerve-jangling encounter. Falcao carried the bitterness of defeat with him. The Colombian captain said, “I found it peculiar that they put an American referee in this instance. To tell you the truth, the process leaves a lot of doubts. He spoke only English, some bias was certain. The referee disturbed us a lot, in the 50-50 plays, he always made the calls in favour of England. It’s shameful that this happens in the Round of 16 of a World Cup.”

Southgate had instructed his players to decide the game in regulation time. Being sacrificed at the altar of the penalty, like in the past, was definitely not in his plans. “I think for the belief of this group of players, and groups of players to come, it was a really important moment,” Southgate said. “Not just winning the shootout, but having to suffer at the end of the game in a stadium where our fans were outnumbered five to one. The fans were brilliant, but because of the numbers it felt like an away fixture. We’ve spoken to the players about writing their own stories. Tonight was a classic.”

HOW THE SHOOTOUT UNFOLDED

Falcao shoots high and straight. Pickford dives to his right.

Kane fires it low and hard into the bottom right corner, just beyond the fingers of Ospina.

Cuadrado hits a rising shot to the left top corner, high away from Pickford’s dive to his right.

Rashford copies Kane, hits the ball low and hard into the right corner as Ospina can’t reach it.

Muriel coolly hit a slow kick to the right side of the goal.

Uribe’s kick strikes the underside of the crossbar and bounces out to safety.

Trippier strikes a rising spot-kick into the left corner of the net.

Bacca hits a rising ball to Pickford’s right, but the ‘keeper skips forward off his line to narrow the angle. Pickford has strong forward momentum and beats the ball away with his left hand thrust high.

Dier places his shot low toward the left corner, and Ospina again guesses correctly, but the outstretched fingers of his right hand can’t keep the ball out.