NEW DELHI: A section of Air India pilots have told they may stop flying unless the airline immediately pays their flying allowance. The airline had this Tuesday paid the basic salaries of July. But for pilots, basic salary represents 30 per cent of their total pay and flying allowance is the major part.

“All the employees of Air India including pilots have received the salary on August 14, 2018. As you are already aware the salary of a pilot in AI only constitutes 30% of the total package. Every month we are being ignored while the company pays the rest of the employees in full and does not pay flying allowance to pilots and cabin crew which forms the major part of our total earnings,” says a letter by the Indian Commercial Pilots’ Association (ICPA, union of erstwhile Indian Airlines’ pilots) sent to the airline management on Thursday. 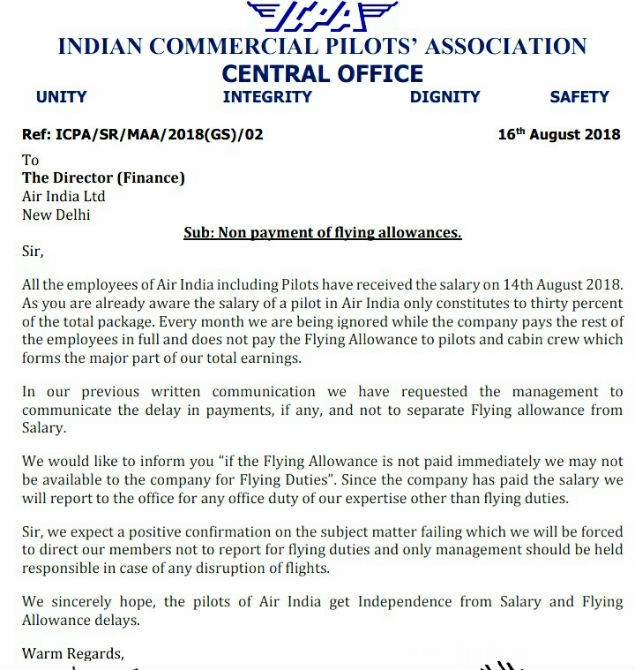 “In our previous written communication, we have requested the management to communicate the delay in payments, if any, and not to separate flying allowance from salary. We would like to inform you ‘if the flying allowance is not paid immediately we may not be available to the company for flying duties’. Since the company has paid the salary we will report to the office for any office duty of our expertise other than flying duties,” the latter adds.

“We expect a positive confirmation on the subject matter failing which we will be forced to direct our members not to report for flying duties and only management should be held responsible in case of any disruption of flights. We sincerely hope, the pilots of Air India get independence from salary and flying allowance delays,” says the letter.