Defending Champions Patna Pirates finally ended their losing streak at home and earned a narrow (29-27) but deserved win over Bengal Warriors in Pro Kabaddi League Season VI. The win meant that Patna Pirates are now top of Zone B table with 23 points after 10 games. This was a low scoring match that saw both teams struggling to score raid points and hence use a defensive strategy. Jaideep made it a great show by getting 5 crucial tackle points on Bengal’s raiders. Ran Singh was given the mantle of Maninder Singh which he did a great job at with 7 raid points in his 10 raids. Deepak Narwal did some damage in the end to take Patna Pirates to the victory with 7 raid points. Jaideep is now the best defender in Season VI and the holder of Orange Sleeve.

Catch all the action as it happened in the match between Patna Pirates and Bengal Warriors in a Pro Kabaddi game through our blog. 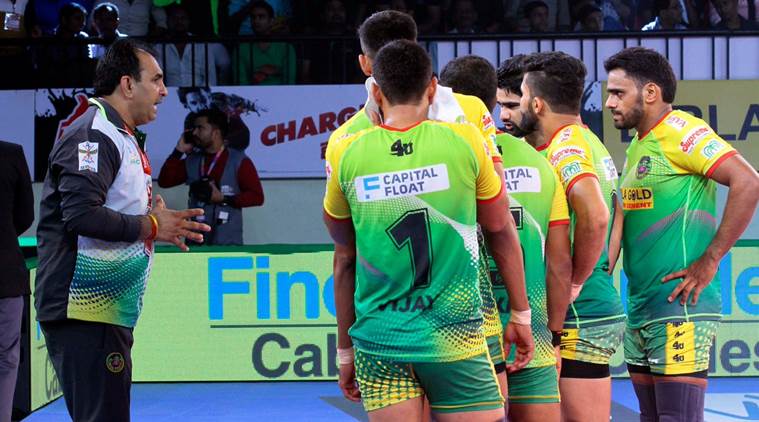 Full time and Patna Pirates beat Bengal Warriors by 2 points, 29-27 the score. Deepak Narwal the star for the defending champions with seven points and even though Ran Singh earned the same number for the Warriors it wasn’t enough.

4 minutes gone and onely one point the difference between the two teams. 25-24 to Pirates. All three results are possible.

Less than 10 minutes to go and who wins this match is anyone’s guess. The trinity of Patna, Deepak Narwal, Manjeet and Vijay have 13 points between them, while Ran Singh, Mahesh Goud and Kane Jung lee have 14. 24-21 to the Pirates.

Both teams neck and neck, 19-17 in Pirates’ favour. Points trickling in favour of both teams, a big moment can decide the game. Patna have 4 players on the mat, Bengal 6.

Second half has begun and both teams earn a point each. A technical point is earned by Bengal Warriors as well. Not what Pirates need or want, not that the warriors are complaining. 16-15 the score.

It’s half time and Patna Pirates have their noses slightly ahead against Bengal Warriors. 15-12 the score.

Patna are now in front and have a clear daylight between them and the warriors. Deepak Narwal brought home three points with his raid and the defending champions are showing their mettle. If one narwal doesn’t get you, other will.

Patna have narrowed the margin and the score now reads 4-3 to the Warriors. Tushar patil and Manjeet with a couple of raid points for the Pirates.

The warriors have taken an early lead, that’s the last thing that Patna Wanted. 4-0 the score. Jang Kun lee with 2/4 points that warriors have.

Bengal Warriors win the toss & select the Choice of court

Patna pirates were beaten in the last raid of the match yesterday! It can be draining emotionally can they show what made them the champions last season? Only one way to find out.

Placed in Zone B both teams are fourth and fifth respectively with 18 points each.

Hello and Welcome to Hindustan Times’ live blog for the match between Patna Pirates and Bengal Warriors.