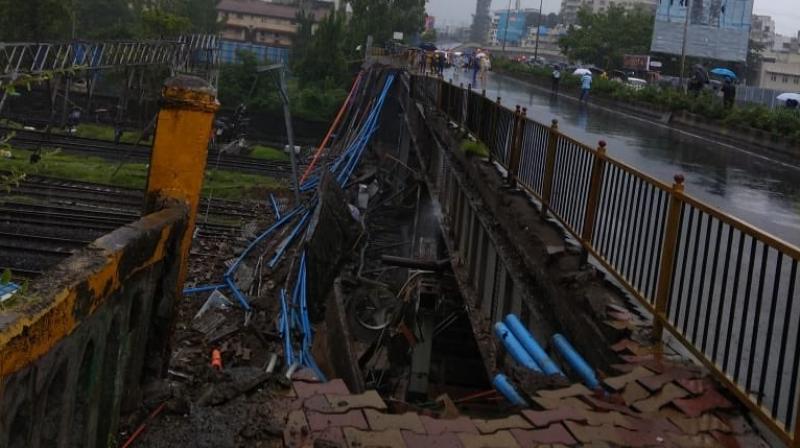 Mumbai: Train services have been disrupted after the pedestrian portion of Gokhale road over bridge that connects Andheri East to West collapsed on the railway track on Tuesday morning following heavy rains. Six people have suffered injuries in the mishap.

The part of the bridge caved in at around 7:30 am and damaged the overhead cables of the railway tracks bringing the trains’ movement on all lines to a halt.

Mumbai fire brigade officials said that they are trying to check if some people are trapped under the debris. However, Railway Protection Force (RPF) has denied anyone being trapped.

“Five injured have been sent to the hospital. Do not think anyone is trapped under debris. Railway administration, RPF, GRP and Mumbai police are present and clearance of debris underway. Railway will probably start operations in next 4 hours,” R Kudvalkar, Railway Protection Force, told ANI.

Officials from the Brihanmumbai Municipal Corporation (BMC), Fire Brigade as well as Railway Police Force have been deputed at the spot. Traffic above and below the bridge has been stopped for now.

A team of the National Disaster Response Force also reached the spot.

Reports have also suggested a traffic jam in the area.

Railways Minister Piyush Goyal has directed officials to speed up the repair work and restore traffic. He has also ordered a probe into the incident.

The enquiry will be conducted by the Railway safety commissioner of the Western circle.

Crowd management machinery has been strengthened on Central Railway at all major stations from Ghatkopar onwards. Harbour line passengers have been allowed to travel freely on Central Railway, Central railway said.

Mumbai police have also issued advisories for the commuters.

Meanwhile, the Western Railways has issued helpline numbers in view of affected traffic in Mumbai.

It has been raining heavily in Mumbai since Monday with parts of the city waterlogged. The met department has predicted heavy rain in the next 48 hours.