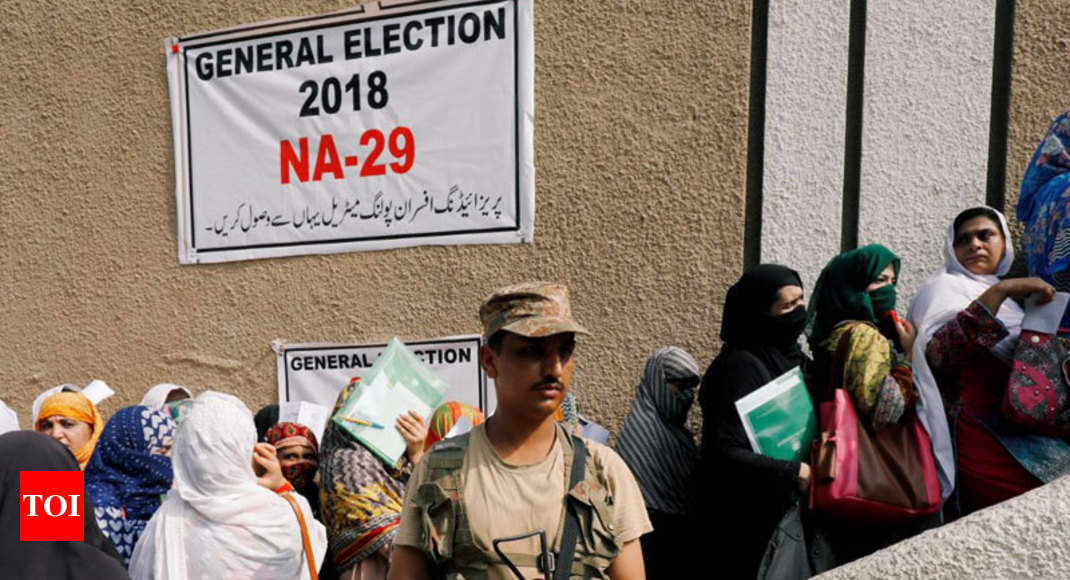 ISLAMABAD: Pakistanis will go to the polls tomorrow to elect a new prime minister, transferring power from one civilian government to another for only the second time in the nation’s 70-year chequered history amid accusations of manipulation by the powerful military and concerns over the participation of Islamic hardliners in large numbers.
According to the Election Commission of Pakistan (ECP), 3,459 candidates are contesting from 272 general seats of the National Assembly, while 8,396 candidates are running for 577 general seats of the four provincial assemblies.

There are 105.96 million registered voters in the country.

The run up to the July 25 elections have seen a massive crackdown on the media and allegations that the military has secretly backed the campaign of former cricketer Imran Khan while targeting his political opponents.

The military has ruled Pakistan through various coups for nearly half of the country’s history since independence in 1947. Even during the civilian rule, the country’s generals have wielded enormous power, setting the agenda for the country’s foreign and security policies.

Questions were raised about the role of the military after reports that it was given magisterial powers. The ECP was also criticised for deploying the Army both inside and outside of polling stations.

Army chief General Qamar Bajwa, however, assured that military personnel deployed for election duties would strictly comply with the code of conduct given by the ECP.

He also said the Army will only perform a facilitative role in the elections and that the polling process is to remain under the control and authority of the ECP.

Former prime minister Nawaz Sharif, the supremo of the Pakistan Muslim League-Nawaz (PML-N) who was jailed this month after being convicted in a corruption case also accused the military of pressuring the judiciary to convict him. Both institutions deny the charge.

The independent Human Rights Commission of Pakistan said there were “ample grounds to doubt” the legitimacy of the elections and criticised the “blatant, aggressive and unabashed attempts to manipulate the outcome of the upcoming elections.”

Controversy has also arisen over allowing militant groups to participate in the poll.

Some of the infamous Pakistani extremist leaders, accused of spreading religious hatred and instigating sectarian violence, are among hundreds of candidates contesting the elections.

The leading among them are Mumbai-terror attack mastermind Hafiz Saeed-led banned Jamat-ud Dawah’s candidates who are fighting with an aim to make Pakistan a “citadel of Islam.” Saeed’s son and son-in-law are contesting the elections.

In the run up to the elections, the country witnessed a series of attacks on candidates and campaign rallies, including one that killed 151 people in Balochistan province.

A fierce battle is expected between Sharif’s PML-N and Khan’s Pakistan Tehreek-i-Insaf (PTI) in Punjab, the most populous province often known for deciding the next government in the country.

For the first time in 2013, a civilian government in Pakistan completed its five-year term.

As the second democratic transition of power is just around the corner, the ECP has taken elaborate measures to ensure that elections are held peacefully and in a fair and transparent manner.

More than 1.6 million polling staff will perform duties on the election day. About 400,000 police officers and 371,000 army troops have been deployed across the country.

The counting will be done on the spot and results will be announced within 24 hours after the polling. The election campaign concluded at midnight yesterday after about two months. All parties have claimed that they will grab most of the seats.

While several polls put Khan’s Pakistan Tehreek-e-Insaf marginally ahead of rivals other surveys suggest the result is too close to call.

Khan has pledged to break the decades-old two party “status quo” of PML-N and its historical rival the Pakistan People’s Party (PPP) — led by Bilawal Bhutto — which is expected to finish third place.

Shahbaz Sharif, the president of the PML-N, said that his party would not only win at the centre but would also form the government in Punjab and Khyber-Pakhtukhwa provinces.

Despite a massive electoral exercise, there is a big question if the election would bring much needed political and economic stability in the country.

Babar Sattar, a lawyer and political analyst — says it is unclear if the elections will end the rift between the elected civilian government and unelected but powerful military establishment.

“The bottom line is that experiment 2018 will fail just like all previous experiments,” he said, referring to the uneasy relations between the elected government and the military establishment in the past.

Political analyst Dr Syed Farooq Hasnat said that this year’s elections are going to be one of the most interesting ones in the country’s history.

“It is not easy to predict which party will form the government. Either it is Pakistan Tehreek-i-Insaf or Pakistan Muslim League-Nawaz, there is many a slip between the cup and the lip,” he told PTI.