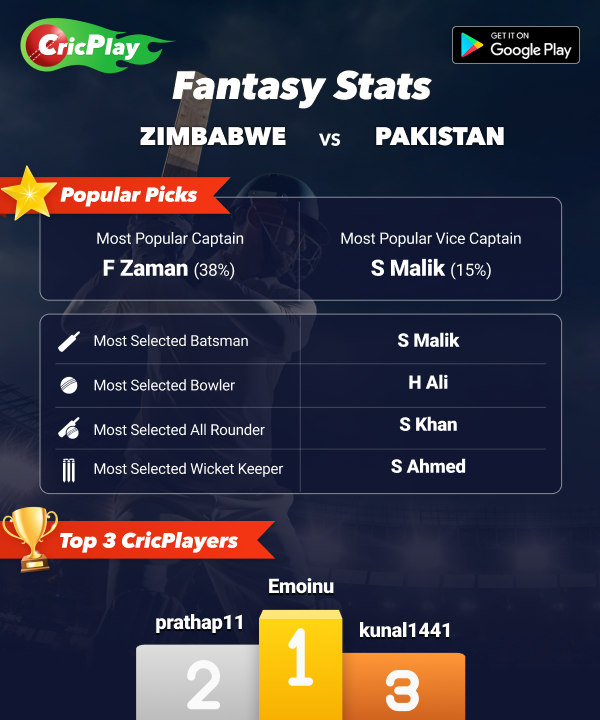 HARARE: Pakistan knocked Zimbabwe out of the Twenty20 tri-series in Harare in a closely-fought encounter on Wednesday, beating the hosts by seven wickets with five deliveries to spare.

Captain Sarfraz Ahmed saw his side home with an unbeaten 38, meaning that Zimbabwean allrounder Solomon Mire’s efforts earlier in the game went in vain.

Mire struck 94, the highest score by a Zimbabwean in a Twenty20 international, but Zimbabwe’s 162 for 4 was not enough to overcome the world’s top ranked T20I side.

Pakistan’s chase was given a rapid start by the openers.

Haris Sohail and Fakhar Zaman took 56 from the Powerplay, but Sohail holed out soon afterwards.

When Zaman skied Mire to depart for 47, Pakistan needed more than eight runs an over from the last eight overs, but Ahmed’s innings of calm precision kept them up with the asking rate.

Executing his attacking strokes perfectly, Ahmed found the gaps and the boundaries whenever they were needed.

He displayed a particularly deft touch with his late cut, taking boundaries off left-arm spinners Tendai Chisoro and Wellington Masakadza with the stroke.

With four runs needed from the final over, it was also the shot he used to end the game, gliding seamer Chris Mpofu to the third man boundary.

Pakistan will face Australia to decide the series’ winner on Thursday.