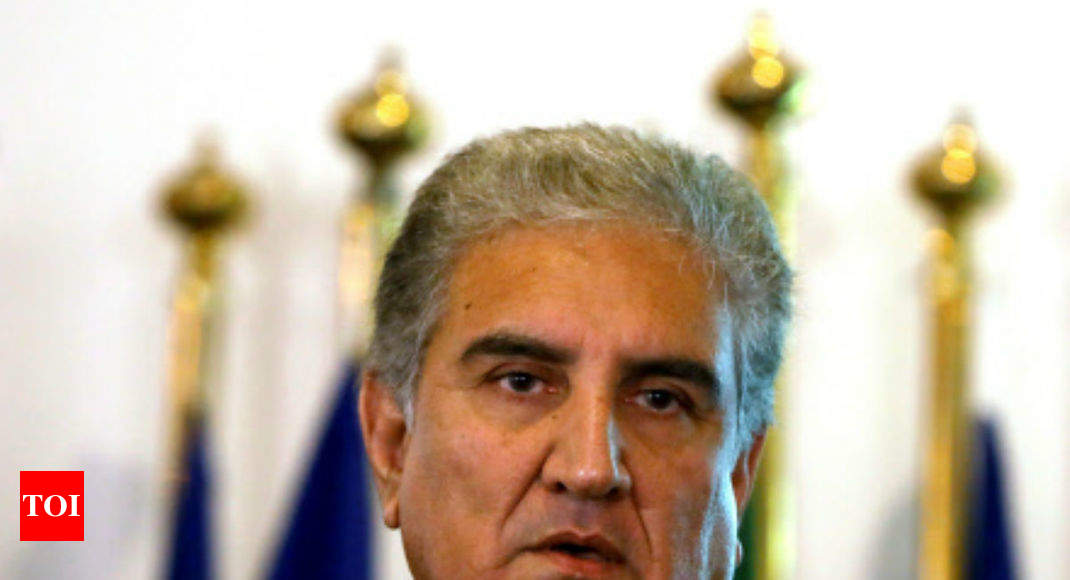 ISLAMABAD: Pakistan’s new foreign minister Shah Mahmood Qureshi on Monday extended the hand of friendship to India soon after taking oath by offering “uninterrupted” dialogue to resolve all the outstanding issues, saying it is the “only wise course” as the two countries cannot afford any “adventurism”.

After the swearing-in ceremony at the President House, Qureshi went to Pakistan’s ministry of foreign affairs and addressed media.

Qureshi was the foreign minister from 2008 to 2011 under the Pakistan Peoples Party (PPP) government when the 2008 Mumbai terror attacks took place. He was in New Delhi when 10 Pakistan-based LeT terrorists attacked India’s financial capital.

The new foreign minister said Pakistan wants to rebuild ties with eastern and western neighbours and create peace in the region.

He said Pakistan wants to resolve all issues with India through talks.

“We need a continued uninterrupted dialogue. It is the only wise course for us,” he said.

The India-Pakistan ties nose-dived in recent years with no bilateral talks taking place.

The ties between the two countries had strained after the terror attacks by Pakistan-based groups in 2016 and India’s surgical strikes inside Pakistan-occupied Kashmir. The sentencing of alleged Indian spy Kulbhushan Jadhav to death by a military court in April last year further deteriorated bilateral ties

Qureshi, the vice-president of the Pakistan Tehreek-e-Insaf, on Monday said external affairs minister Sushma Swaraj sent a letter on Sunday to congratulate Prime Minister Imran Khan and mentioned about talks to resolve issues.

“I welcome her letter,” he said.

“I want to say to Indian Foreign Minister that we are not only neighbours but also nuclear powers. We have old issues and we both know what these issues are. We need to address these issues,” he said.

Qureshi said that the two countries cannot afford any adventurism due to close proximity.

“We cannot afford any adventurism as response time is so short. The only option is to engage with each other. We cannot live in enmity and we have to accept that there are outstanding issues,” he said.

He said Kashmir is an issue and both countries know about it.

He said former prime minister Atal Bihari Vajpayee visited Lahore and Islamabad and recognised the reality of Pakistan and the issue of Kashmir.

“Whether we wish or not, Kashmir is an issue and both countries have recognised it. In my opinion there is no option other than talks to resolve it,” he said.

Prime Minister Khan in his maiden address to the nation on Sunday said Pakistan will hold talks with all its neighbours to normalise ties as without it peace cannot be brought in the country.

Talking about Afghanistan, Qureshi said he will make a phone call to the foreign minister of Afghanistan and also visit Kabul with a “solid message” that both countries have same destiny.

“There will be no peace in Pakistan without peace in Afghanistan,” he said.

“I want to tell people of Afghanistan to understand each other’s problems and bilaterally try to resolve all issues,” he said.

Talking about relations with the US, he said there is trust deficit between the two countries but Pakistan wants to have good ties based on its interests.

Qureshi said that the foreign policy of the new government will be based on interests of Pakistan and it can be fine-tuned according to the needs of the nation.

He said that the priority of Pakistan’s foreign policy will be “how we can change lives of common people through economic diplomacy.”

“We will try to change lives of people through socio-economic development,” he said.

He said there are enormous local and regional challenges but “we want to make progress on these issues.”

“Some forces have been trying to isolate the country but it will not happen now,” he said.

He said his government will build national consensus on foreign affairs. ?I will follow bipartisan approach on the issues of foreign policy.?

He announced that he will invite opposition leaders for consultations before the next month’s UN General Assembly session.