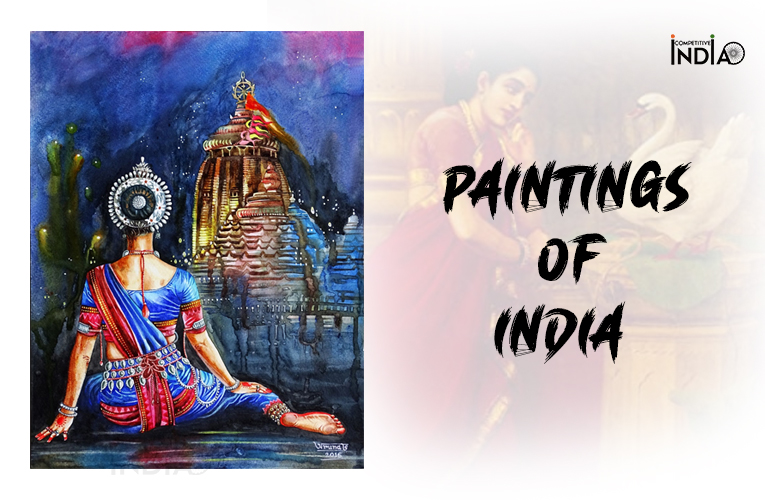 India has a rich past of paintings and some Indian paintings trace back to around 8000 years and that was the time of prehistoric paintings. People at that time used to draw figures of wild animals such as elephant, bison, stag, etc. on the rocks and in the caves with the help of primitive tools and later colour them. This started the culture of paintings in India. So, let’s find out how this culture evolved and took it modern form that we see today.

1. Upper Paleolithic – This was the time when people used to draw paintings of animals like rhino, bison, elephant, etc. using white, dark red and green colours obtained from natural sources.

2. Mesolithic – After the paleolithic period, people started drawing hunting scenes and scenes from their day-to-day life and this is commonly known as the Mesolithic period. Use of red colour is commonly seen during this period in the form of small paintings on rocks.

3. Chalcolithic – This period witnessed the use of green and yellow with people drawing battle scenes, animals and other scenes of other human activities. This was the advanced phase of pre- historic paintings.

Paintings that were drawn in prehistoric times or later were broadly classified into two types:

1. Mural Paintings – These were paintings of huge size drawn on rocks or on walls of caves in prehistoric times and in palaces or walls of forts in the medieval period. These paintings give us an insight into the great civilisations of India in the past and lifestyles of people, kings, warriors, etc. at that time. Examples of these types of paintings include the paintings of Ajanta, Ellora and Elephanta caves, Pallavas paintings, Chola paintings, Vijanagara paintings, etc.

The modern school of Paintings was totally different from previous schools of paintings. These paintings were of varied nature and focussed more on the imagination of the artist. The paintings of these times include some of the best paintings in the history of India.

There was a group of artists which broke from the Bengal School of Art and presented a modern art of independent India. This group included eminent artists like M.F. Hussain, H. Raza, K.M. Ara, S.K. Bakre and H.A. Gode.

The Madras School of Art under Debi Prasad Roy Chowdhury and K.C.S Paniker emerged as an important art centre in the post-independence period and influenced a new generation of modern artists.

Modern School of Paintings left an everlasting imprint in the history of paintings in India and still, it is among the best creations of India in past.

Folk paintings are paintings which are drawn by some tribal or ethnic communities in India during their festivals, religious gatherings or family functions. These paintings are simple, colourful, vibrant and represent the diverse culture of India.

Some of the folk paintings of India are:

2. Worli Paintings – Worli tribals of Thane district in Maharashtra decorate their house walls with paintings depicting their daily activities. These paintings consist of symbols of the Sun, Moon and stars along with plants, animals, insects and birds. On ritual and ceremonial occasions, Warli home walls are plastered with dung. Rice paste is used with red ochre powder to tell stories and to invoke the blessings of their goddess of fertility, Palaghata.

3. Kalamkari – Kalamkari meaning “pen craft” is drawn with a kalam or pen, used for freehand drawing of the subject and filling in the colours. Paintings are usually hand-painted or block-printed on cotton textile. This style grew around temples and had a distinctly religious identity – scrolls, temple hangings, deities and scenes from the great Hindu epics.

4. Kolam – Kolam is a ritualistic design drawn at the threshold of households and temples. It is drawn every day at dawn and dusk by women in South India. Kolam marks festivals, seasons and important events in a woman’s life such as birth, first menstruation and marriage. Kolam is a free-hand drawing with symmetrical and neat geometrical patterns.