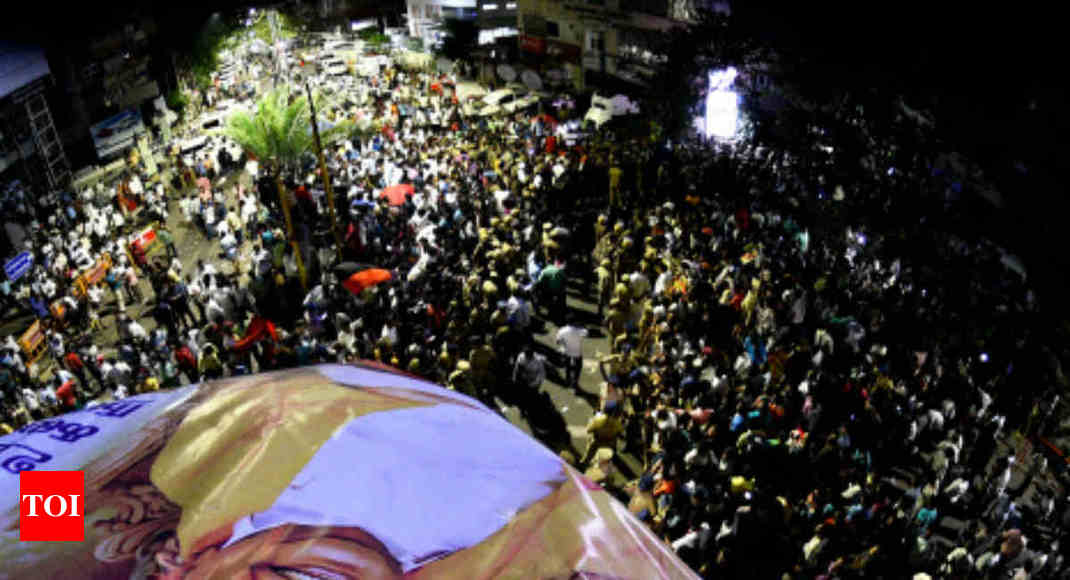 CHENNAI: A massive controversy erupted after the Tamil Nadu government rejected opposition DMK’s demand for allotting space on the Marina beach for the burial of its leader M Karunanidhi and offered space near the memorials of former chief ministers C Rajagopalachari and K Kamaraj. Opposition leaders, including Rahul Gandhi, backed the DMK’s demand and urged the government to allot the leader a space on the beach.

The development came on a day when a PIL filed in the Madras HC seeking to restrain the Corporation of Greater Chennai from permitting any burial of bodies on Marina Beach was dismissed as withdrawn today. DMK working president MK Stalin, recalling the long public life of Karunanidhi, had written to CM K Palaniswami seeking space inside the mausoleum complex of the departed leader’s mentor CN Annadurai at the Marina.

A government statement said it was “unable to allot space at Marina beach owing to several pending cases in the Madras high court and legal complications.” Hence, the government is prepared to allot a two-acre site on Sardar Patel Road near the memorials to Rajaji and Kamaraj, it said. Some reports said the government was reluctant about allotting space for Karunanidhi’s burial at the Marina as he was not a sitting chief minister.

Former chief minister MG Ramachandran and his protege J Jayalalitha were buried at the Marina beach and memorials to them were erected there. Both were bitter foes of Karunanidhi in politics. DMK cadres held impromptu protests and engaged in sloganeering demanding a place for Karunanidhi’s burial at the Marina beach even as minor incidents of violence were reported from some parts of the state.

Opposition parties backed the DMK’s demand for Karunanidhi’s burial at the Marina. Congress President Rahul Gandhi said that like the late chief minister J Jayalalithaa, Karunanidhi was an expression of the voice of the Tamil people and that he “deserves to be given space on the Marina beach.” Tamil film star Rajinikanth urged the state government to “take all efforts” to lay to rest Karunanidhi near the Anna Memorial on Marina.

“That is the due respect we would be giving to that great man,” he said in a tweet. MDMK and PMK also backed DMK.