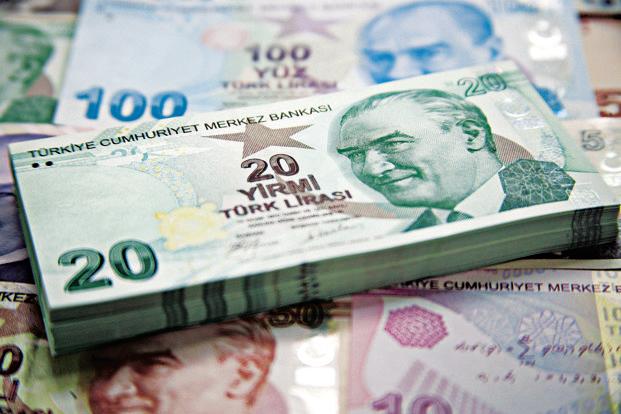 In the roughly 18 months since Donald Trump was elected US president, the Turkish lira has lost half its value, hitting a level of 7 TRY to $1 last week. Photo: Bloomberg

In January 2017, when Donald Trump was sworn in as president, the Turkish lira was trading at 3.5 to $1. In the roughly 18 months since, the TRY has lost half its value, hitting a level of 7 TRY to $1 last week, before a modest recovery in the last few days.

In many ways, the economic backdrop in some of the countries where this is happening is the same as in previous crises. The weakest currencies have been the ones with the most external hard currency borrowing (Turkey), political turmoil (Brazil and Turkey) and/or the highest current account deficits (Pakistan, 5.7% of gross domestic product). A stubbornly high oil price has added pressure on currencies like the Indian rupee and the yuan. For the first calendar quarter of this year, China recorded its first quarterly current account deficit in 17 years (even as its trade surplus with the US remained at record highs).

However, in some important ways, this crisis is different, coming as it does during a trade war and caused just as much by political belligerence and functional incompetence as economic issues.

The case of the lira is instructive. Turkey has a low savings rate and an extraordinary appetite for hard currency borrowing by companies. This resulted in a high current account deficit and a tendency towards inflation. An “independent” central bank should have raised rates many quarters ago—it was bullied by a populist authoritarian president into not doing so. President Recep Tayyip Erdogan believes that increasing rates is not a solution and that Turkey, with help from other countries (Qatar has just offered $15 billion), can weather the storm. Even as companies in Turkey behaved as if they were members of the European Union and North Atlantic Treaty Organization at the same time, its president has taken the country in the opposite direction. That fundamental dichotomy snapped global investor confidence last week and manifested in the lira’s rout. To complicate matters, Erdogan appointed his son-in-law, Berat Albayrak, to the post of finance minister recently. The appointment of loyalists to positions of power and influence by populist authoritarians around the world adds lack of competence as a source of volatility to a cocktail of economic factors.

The role of the US in this crisis should also not be underestimated. Good economic growth in the US has necessitated a normalization of the low interest rates that have been the norm since the global financial crisis. In proximate terms, this steady increase in dollar interest rates has led to a “currency tantrum” in the emerging markets. However, the growth in the US comes because a populist president has borrowed heavily from the future through a dramatic reduction in taxes enacted in great haste last December.

To add fuel to that fire, Trump has openly quarrelled on trade with other countries—particularly those that maintain a trade surplus with the US—and has noisily slapped tariffs on a host of products. Almost all those countries have retaliated with counter tariffs and this has escalated into an all-out trade war. Save for the fact that the dollar is the world’s reserve currency, it should not be rallying at all.

Even though for some countries, like Turkey and Pakistan, this crisis is real, for many others, this episode will pass. The old order of emerging markets and the IMF has long since gone. China and, to a lesser extent, India and Indonesia, have competent institutions that have prudently raised rates and have adequate firepower in terms of foreign exchange reserves to bring stability to their economic systems. As the old story goes, the ageing bully (US) has kicked up some sand on the beach. The weak will suffer, but healthy young adults will simply move on.

The Reserve Bank of India can take some credit for seeing this coming and raising interest rates twice. It may need to do more—and it should retain the spine to do it during an important election season coming up. For the longer term, the lesson from the Turkish crisis is to promote domestic savings—both post-tax savings and pensions. This is one more reminder that India must nurture pension-related savings in the government, corporate and individual sectors. These savings can, and should, substitute for the disproportionate role that foreign capital still plays on our stock market (as the marginal price setter) and in foreign direct investment. As for the government, it should explicitly set a zero revenue-deficit goal in the next administration. Unlikely, but required if India is to distinguish itself from the garden-variety emerging market.

P.S. “The first panacea for a mismanaged nation is inflation of the currency; the second is war. Both bring a temporary prosperity; both bring a permanent ruin. But both are the refuge of economic and political opportunists,” said Ernest Hemingway.

Comments are welcome at narayan@livemint.com.