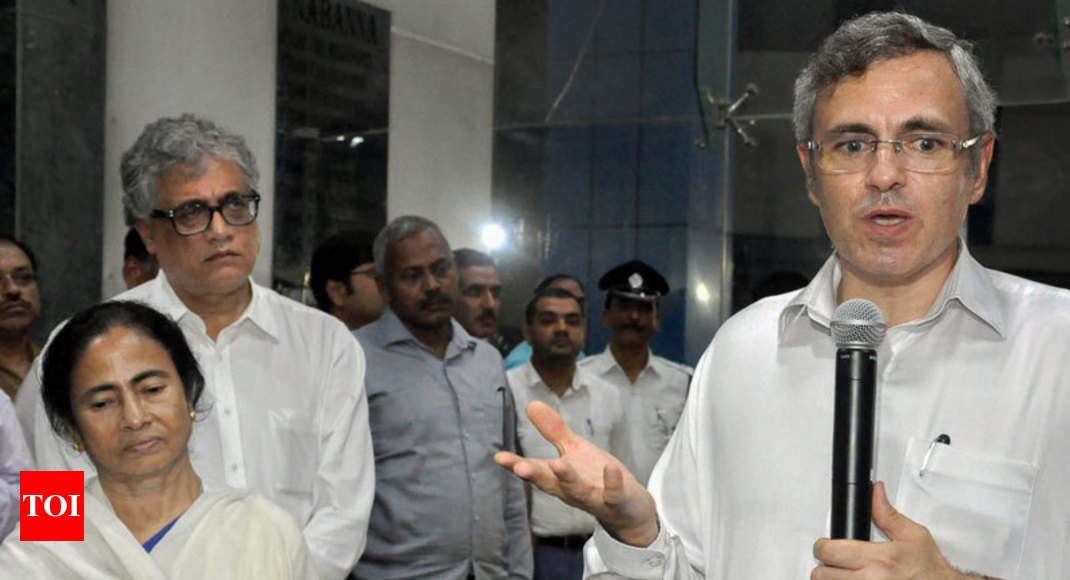 KOLKATA: Former Jammu and Kashmir chief minister Omar Abdullah on Friday urged all anti-BJP parties to put their differences aside and unite against the BJP in the 2019 Lok Sabha elections.

Abdullah, who called on West Bengal chief minister Mamata Banerjee in Kolkata during the day, said they had mainly talked about the prevailing situation in the country and the need to form a united front to take on BJP in next year’s Lok Sabha polls, besides discussing the issue of unrest in Kashmir.

“…Of course no discussions between the two of us would be complete without discussing the prevailing situation in the country. The fear that prevails among the minority community in the country and also the need that is there for us to be together for a united front to take on the BJP in the forthcoming in general election next year,” he told reporters at the state secretariat Nabanna.

“Going ahead, the other parties also have to be included. We will try to set aside the differences as far as possible and go for the best in terms of taking the fight to the BJP in 2019,” he said.

Asked whether Congress would be a part of the proposed federal front, Abdullah said it would be wrong to pick and choose between the parties even as he stressed on the importance of assembling all the anti-BJP forces together.

“We haven’t given the alliance any name yet. The names are being given by the media. All parties that are against BJP will be made a part of this initiative. There is no restriction on any parties.”

“It will be wrong to say that we will allow certain parties to be in the alliance while some others will be left out. Our attempt would be to assemble all the parties that are against BJP to put up a fight against them in the coming election,” he said.

However, he refused to comment on whether the opposition should opt for a one-on-one fight with the BJP in the polls.

The National Conference vice president also refused to comment on whether Banerjee could be a possible prime ministerial candidate, saying that focusing on names even before the elections would damage what the opposition parties are trying to achieve.

“Neither the election dates are announced nor the nominations have been filed, so it makes no sense to talk about the prime ministerial candidates right now. Our initial aim should be to take our fight to the BJP. It is not correct to think about names right now. If we start doing that, we will spoil the thing that we are trying to achieve,” he added.