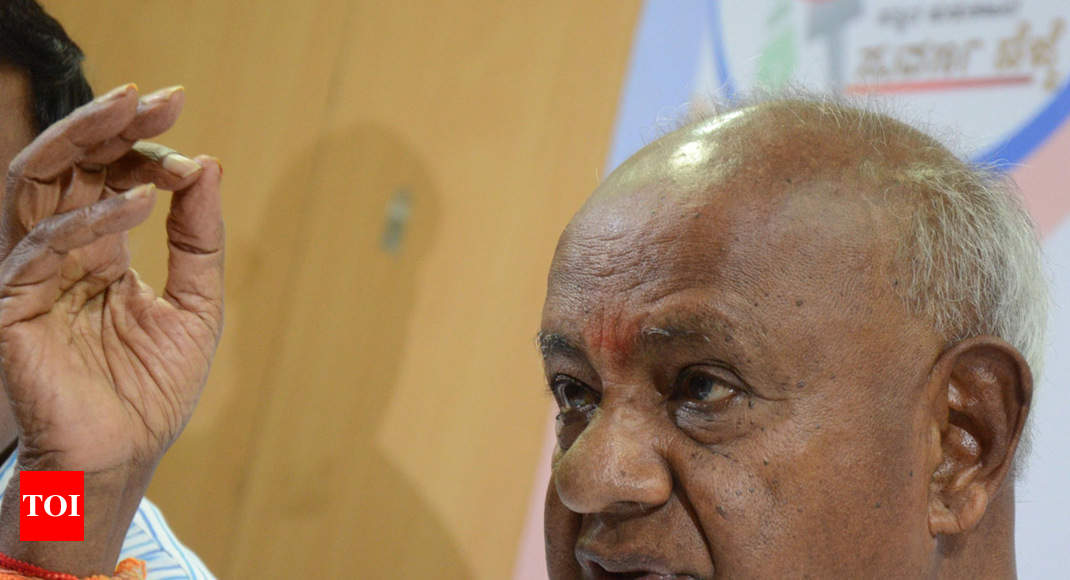 NEW DELHI: Pitching for a “formidable front” against the BJP, former prime minister and JD(S) supremo HD Deve Gowda has said he is not averse to projecting TMC chief and West Bengal Chief Minister Mamata Banerjee as the Opposition’s prime ministerial face for the 2019 Lok Sabha polls.

The remark by Gowda, 85, comes against the backdrop of reports that the Congress and other opposition parties favour leaving the issue of a prime ministerial candidate for the post-election phase as they feel that opposition unity could be hurt if the subject is taken up ahead of the polls.

The remark also comes days after top Congress sources indicated that the party will not mind a nominee for the top post from any Opposition alliance which does not have the backing of the Bharatiya Janata Party (BJP) and the Rashtriya Swayamsevak Sangh (RSS).

Gowda, whose party has formed a coalition government in Karnataka with the support of the Congress, said the Congress will play a crucial role in forging opposition unity in the bid by the alliance to dislodge the BJP from power.

In an interview to PTI in Delhi over the weekend, the former prime minister noted while the formation of a third front is still in the “early stage” Banerjee is “trying her best” to bring all the non-BJP parties together. Gowda headed the Janata Dal-led United Front(UF) coalition government in 1996 but his tenure did not last more than a year.

Banerjee is pursuing the task of the formation of a federal front seriously after the draft National Register of Citizens (NRC) in Assam that excluded 40 lakh people from the list in the eastern state, he said.

Banerjee is a bitter critic of the NRC and has pilloried the BJP over the citizenship issue. She is also seeking the support of other opposition parties to take on the ruling party. The BJP has stoutly defended the Supreme Court-mandated exercise, saying it concerned national security and safety of the country’s citizens.

Asked if he would support the TMC chief as the prime ministerial face of the opposition, Gowda said: “Most welcome if Mamata is projected as PM. Indira Gandhi ruled as prime minister for 17 years. Why should we (men) alone become PM? Why not Mamata or Mayawati?”

Indicating he is not opposed to a woman prime minister, Gowda said he had piloted the women’s reservation bill in Parliament way back in 1996.

Noting that the JD(S) has not made any effort to unify regional parties so far, he however said the regional party is prepared to cooperate with other parties to fight the BJP.

“It is because there is a sense of fear in the country. There is a suffocating atmosphere for minorities in states like Uttar Pradesh, Bihar and Gujarat. A formidable front is necessary to take on the BJP in 2019,” he noted.

Observing that the clamour for a political alternative to BJP will gradually gain momentum, Gowda stressed that the Congress as a national party will also play a crucial role.

“I want to see how things will shape up in the next 2-3 months,” he added.

Gowda also mentioned that the Congress and his party will fight together in Karnataka during 2019 general polls. However, the issue of seat sharing has not been discussed yet, he said. Karnataka accounts for 28 Lok Sabha seats.