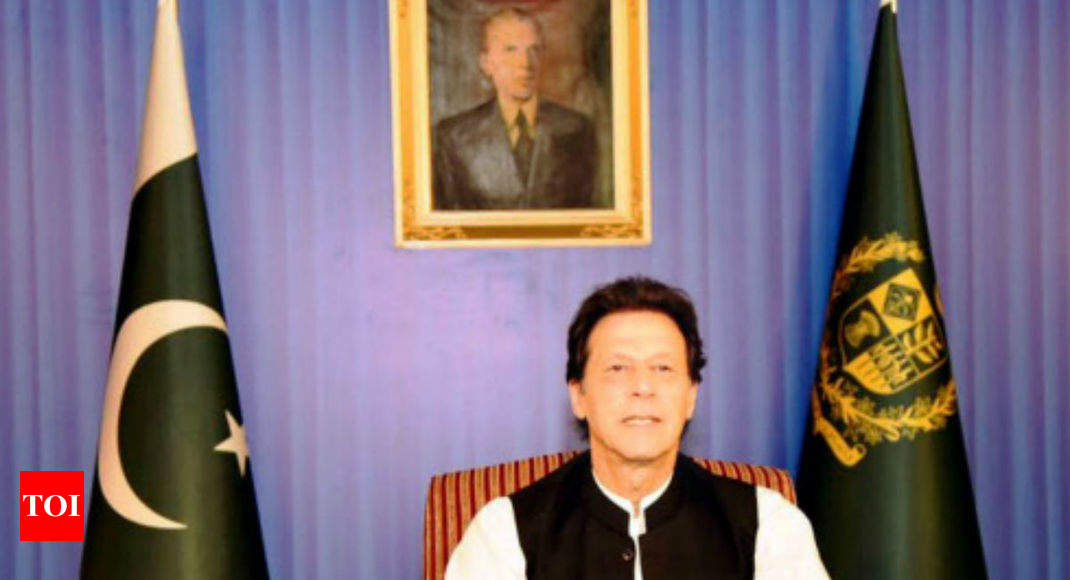 ISLAMABAD: Pakistan will work to have “best relations” with all its neighbours and hold talks to normalise ties as without it peace cannot be brought in the country, new Prime Minister Imran Khan has said in his maiden address to the nation.

In his over hour-long address to the nation on Sunday, a day after his swearing in as the country’s 22nd prime minister, Khan identified Pakistan’s challenges on economic front, promised sweeping reforms to bring austerity and revive stagnant economy.

The Pakistan Tehreek-e-Insaf chief lashed out at the previous PML-N government for current debt crisis which has risen to Rs 28 trillion, saying the country had not been as indebted in its entire history as it has been in the last ten years.

Speaking on Pakistan’s foreign policy, 65-year-old Khan said Pakistan will work to have “best relations with all neighbours.”

“I have talked to all neighbours and Insha Allah, we will improve relations with all neighbours. Without peace (with neighbours) we cannot bring peace in Pakistan,” he said.

In Sunday’s address to the nation, essentially a roadmap to the ‘Naya Pakistan’ Khan has promised to his supporters, the prime minister announced he will set up a task force to bring back the bulk of plundered public money from abroad.

Outlining his government’s approach to resolve the country’s economic issues, he emphasised on taking austerity measures, working on tax reforms instead of taking loans and rooting out corruption.

Khan once again promised to transform Pakistan into a Medina-like welfare state, which was set up by the Prophet in early years of Islam.

He said Medina state was set up on the principles of rule of law, protection of rights of minorities, progressive taxation, based on merit, education for all and honest leadership.

He said the economy is in bad shape due to debt heaped by the past government. He said 10 years ago, the total debt of the country was Rs 6 trillion which has increased to Rs 28 trillion.

“Never in Pakistan’s history have we faced such difficult economic circumstances. Our debt burden is now Rs 28 trillion. We haven’t been as indebted in our entire history as we have been in the last ten years,” he said.

He spoke about the poor human development index of Pakistan and said more than 23 million children were out of schools and 45 per cent children had stunted growth.

“On one hand we are so indebted, and on the other hand our human development index ranking is very poor,” he said.

He announced to deal with the corrupt elements with iron hand and said all wealth of the country stashed abroad by rich Pakistanis will be brought back.

He asked overseas Pakistanis to keep their money in Pakistani banks and invest here assuring them that their investments will be safe in his government. He promised to facilitate the investors.

Khan announced setting up a task force to cut down the expenses of the government. He also said that he will meet the Chief Justice of Pakistan to draw up a scheme for speedy justice so that all cases were decided within a year.

On tax reforms, he said instead of trying to rebuild the economy by taking external loans, his government will try and fulfil its needs from within.

“No country can succeed by taking on debt again and again. Debts are taken for brief periods of time. I will be ashamed to go abroad and ask for money. If the leader of the nation has to go and ask for debt, what will my nation be?” Khan said.

“We will fix the Federal Board of Revenue (FBR) and assure the nation that I will be responsible for your taxes. It is your responsibility to pay taxes. If we start paying taxes we will get out of deficit,” he said.

Khan said he will form a committee to figure out how to cut expenses nationwide. He promised to start the change from his life.

He said he will live in a three-bedroom residence within the official PM House, which was reserved for the Military Secretary.

He announced to transform the sprawling PM House into a modern research university.

He said there were 524 workers and officials deputed at the PM House but he will keep only two of them. Out of the 80 vehicles, including 33 bulletproof vehicles, he said he will use only two of them and auction the rest and deposit the money into the national treasury.

The prime minister, at the end of his maiden address, told the nation to play a more proactive role in the rebuilding.