Nokia X, HMD Global’s upcoming X-Series smartphone that has previously been rumoured to be called the Nokia X6, is all set for an official unveiling in China on May 16. After confirming the launch date of the company’s first smartphone with a display notch late last month, HMD Global is now said to have revealed that the event will be held in Beijing, China at 2pm (local time) on the same date. Additionally, a new poster has been teased by an electronics retailer in the country that shows the Nokia X from its back.

Starting with the teasers by Chinese retailer Suning.com. These have given us a clearer look at the Nokia X’s design, something that was teased by the company last month revealing a bezel-less display and an iPhone X-like notch. A banner by the retailer reveals a glass and aluminium body, a vertical dual rear camera setup, a rear-mounted fingerprint sensor, and, of course, a notch at the front. A slight bottom chin with Nokia branding is also visible. As per the banner, Suning.com requires to send in entries for a contest that will be held from May 3 till May 20. 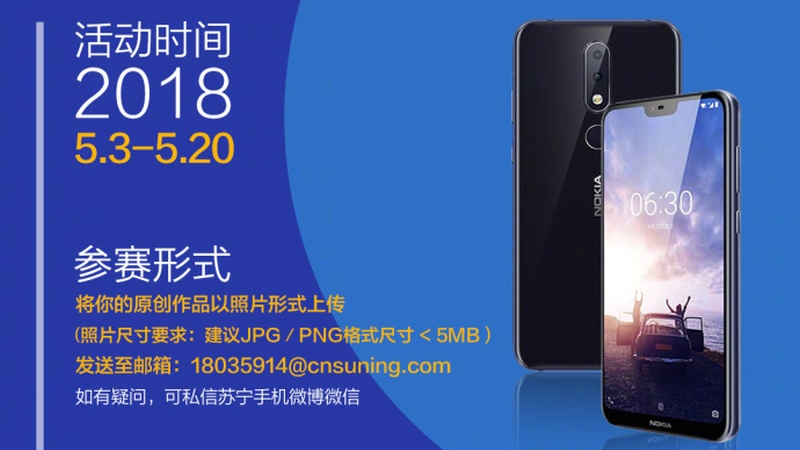 As mentioned, the Nokia X is said to be set to launch in Beijing at 2pm CST (11:30am IST) on May 16. This development is seen in a seemingly official poster, first reported by ITHome. As seen before, this poster also shows parachutes and certain air-dropped boxes. This might hint towards the presence of gaming features in the phone. However, what Nokia wants to signify will be seen at the launch next week. According to the report, pricing of the handset is said to start at CNY 1,600 (roughly Rs. 16,900).

The upcoming Nokia X is suggested to run Android 8.1 Oreo out-of-the-box, and sport a 5.8-inch full-HD+ (1080×2280 pixels) display with an 19:9 aspect ratio. The phone might be powered by a Qualcomm Snapdragon 636 or a MediaTek Helio P60 SoC, coupled with 4GB/ 6GB of RAM and 64GB/ 128GB inbuilt storage. There is expected be a dual rear camera setup with a 12-megapixel Carl Zeiss lens.