Lalu Prasad’s elder son Tej Pratap Yadav said he has filed a divorce case and the court will now decide if there is any point in continuing with this marriage. 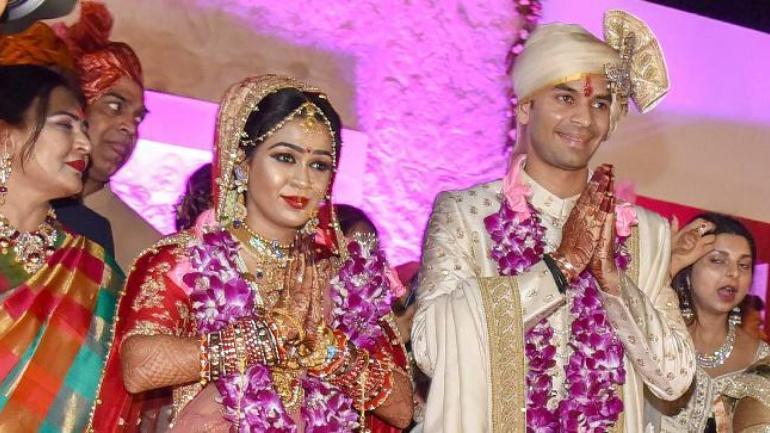 Rashtriya Janata Dal (RJD) leader Tej Pratap Yadav on Saturday confirmed that he is filing for divorce from his wife Aishwarya Rai. “It is true that I have filed a petition,” he said.

He said he has filed a divorce petition and the court will now decide if there is any point in continuing with this marriage.

He said it had become impossible to live with Aishwarya Rai, whom he married in May this year.

Tej Pratap is a sitting MLA from Mahua in Vaishali district.Tej Pratap Yadav  was also the health minister when Nitish Kumar was leading the grand alliance government in Bihar with support of RJD and the Congress.


Tej Pratap filed a divorce petition in a Patna court on Friday (November 2) on the grounds of cruelty.

His wife, Aishwarya also comes from a political family.

Her grandfather Daroga Rai was a former chief minister of Bihar while her father Chandrika Rai is a former minister and a Rashtriya Janata Dal (RJD) leader.

The news of their separation comes months after speculation first rose of Aishwarya joining politics.

The two got married at a grand ceremony which was attended by several politicians including Chief Minister Nitish Kumar, Governor Satya Pal Malik and Union minister Ram Vilas Paswan.

His father and RJD chief Lalu Yadav came out on bail to attend the wedding.

Around the time of their wedding, RJD workers had floated posters depicting the couple as Shiv-Parvati.

Meanwhile, there have also been reporters suggesting that the relation between Tej Pratap and his younger brother Tejashwi Yadav is not in the pink of health.

Reports say Tej Pratap is unhappy that his father Lalu Yadav prefers Tejashwi over him and is likely to chose him as his successor.

On Monday, Lalu Yadav’s eldest daughter Misa Bharti acknowledged the “rift” between her two brothers”. She later clarified that despite all differences, the party is a “big family”.