No name should be picked as PM nominee for opposition front: Mamata Banerjee | INDIA
Categorized as
89
Tagged as
Lok sabhaMamata Banerjee
Related 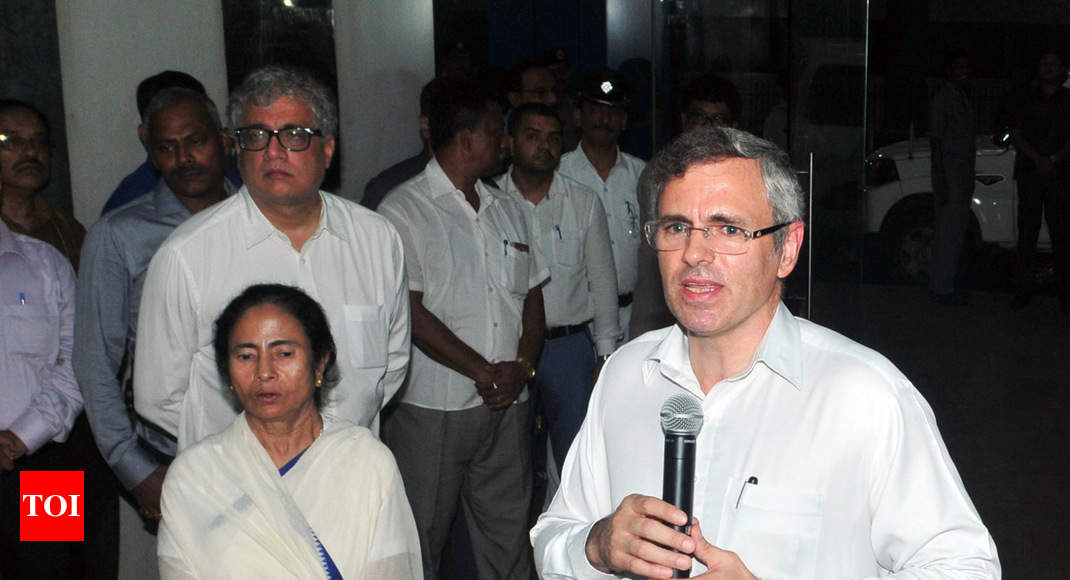 KOLKATA: West Bengal chief minister Mamata Banerjee, who held a meeting with senior National Conference (NC) leader Omar Abdullah here on Friday, said no name should be picked as the prime ministerial candidate of the probable Opposition front in the next Lok Sabha polls as it would divide the unity of the regional parties fighting the BJP.

She asserted that all the regional anti-BJP parties were together and they should sacrifice for the country’s benefit.

“Please do not pick and choose any particular name to divide us,” the Trinamool Congress (TMC) chief told reporters after her meeting with Omar Abdullah.

She said this when the reporters asked Abdullah, who was in the city to take part in a forum discussion, whether the Opposition was ready to highlight Mamata Banerjee as the prime ministerial candidate of the federal front in the 2019 Lok Sabha election.

Echoing Banerjee, Abdullah, a former Jammu and Kashmir chief minister, said it was too early to choose the Opposition’s prime ministerial candidate.

“Our main focus should be to come together and put up a good fight against the BJP and then, we can decide on that,” he added.

The TMC chief has been a vocal critic of the BJP and has been espousing a “one-on-one” fight by the opposition parties against the saffron party, instead of contesting against each other in the coming general election.

Alleging that the BJP-led government at the Centre was planning a presidential mode of election in the Lok Sabha polls, Banerjee said the saffron party was acting “like a dictator” and all the anti-BJP parties should come together and “sacrifice” to save the country from it.

Asked if the Congress would be a part of the anti-BJP front, Abdullah said, “All those parties who are anti-BJP will be included in the coalition. There will not be any condition on them.”

He added, “Mamatadi is still concentrating on improving and protecting West Bengal. Afterwards, we will pull her to do the similar kind of welfare (what she has done for the state) for the country. But if we continue discussing the name (of the prime ministerial candidate), we will lose our focus and our motto to defeat the BJP will be affected.”

Elaborating on the probable federal front, Abdullah said, “The parties in a true federal front do not have any differences. We (TMC, NC) have no differences to set aside. All we have to do is agree where possible. We have to cooperate with each other.”

TMC MP Derek O’Brien had been raising the issues related to Jammu and Kashmir in the Rajya Sabha since there was nobody to represent the state in the Upper House of Parliament, he added.

“Other parties will also have to be included. We will try to put the differences aside and put the best foot forward in the fight against the BJP in 2019,” Abdullah said.

He was quick to add that the name “federal front” was given by the media and not by the opposition parties.

Speaking on the discussions he had with Banerjee, Abdullah said it centred on the prevailing situation in the country and the “fear” that was there particularly among the minority community, besides the need to put together a united front to take on the BJP in the general election.

He added that they also talked tourism.

“I felt it necessary to call on Mamata didi basically to discuss with her the prevailing situation in my state, because I know she has a great concern for what is happening in Jammu and Kashmir, particularly when she was the railway minister and I was in the same government at the Centre,” he added.